Covington cool cids (ccc) are all in New Orleans and having a swell time. Today we rode in an airplane.  It took 2 hours and 30 minutes to get to this wonderful city of New Orleans. We went to the restaurant The Big Cheezy, the food was spectacular.  I enjoyed my meal, so did everyone else. I have to write this blog because I dabbed on one of the Global Works people too hard. I think she is still recovering from it.

We picked up at the airport and headed to a delicious grilled cheese restaurant called the Big Cheesy. We found it funny because one of New Orlean’s nicknames is the Big Easy. After eating that very scrumptious and filling meal we were driven to our cabins we would be staying for the next few days. Arriving at the cabins, we ere amazed at the beauty and how close we were to the water. After settling in we had orientation to explain just the simple rules and who we were going to be with. After that we had a few more minutes to prepare for our night of fun.

This afternoon we went into the city of New Orleans and ate dinner at a cool restaurant called Mothers. The food was great, and I think we all agreed. We waited in line to order and then we sat down to wait for them to bring our food. After dinner we went to a parking lot and got out of our vans and then walked to the place we were meeting our tour guide for the haunted history tour. Our guide brought us around the city showing us places that were possessed about what happened a long time ago. I think we all thought it was really cool and creepy. When the tour was over we went back to the vans and drove back to the cabins and just relaxed until we had to go to sleep.

Today is Thursday January 12th 2017. We woke up this morning at 7:20 and walked over to our counselors cabin for breakfast. When we finished Chloe and Ava told us about our day ahead. We hopped in the van and made our way to city park to start our community service work. This morning we were planting trees to take the spots of the trees that were either damaged or destroyed from hurricane Katrina. We took wheel barrels deep into the trail. When we reached our spot we got into groups of 2-4 and started working. My partner and I dug a hole then placed the tree inside of it. We then formed a ring of mulch around it. We did this 5 times. We headed back to the picnic tables to eat lunch. On the shore of the water everyone noticed an oddly shaped dead animal. Everyone called it the “beavcoon”. It turned out to be a possum, but everyone still calls it a beavcoon. After that, the high ropes course experts guided us through a forest to the course. The first thing I did was go on a tight rope 30 feet up. It was an incredible experience. I could see about all the trees. My final course that I decided to do was the leap of faith. You climb about 20 feet up a post and the balance on your feet on the top of it and dive for a trapeze. I was the final person to go, and it was nerve wracking. I climbed to the top and found my balance on the post and leaped. I grabbed the trapeze and with all my might held up my body. It was a great day.

January 13, 2017
I’m the morning we woke up and had breakfast. Once we got onto the vans we drove to the Green Light Project. There we were split into 4 groups. Each group had a different responsibility to garden, change out lightbulbs, paint, or make gardens for people. Shorty after we ate the lunches that we made for ourselves, we switched the things that we were doing. At the end of the day we went back to our cabins and chilled for a few hours until dinner. For dinner we made tacos. After dinner we did a couple activities to help us reflect on the service that we did over the past couple days. Then, we went to bed.

Today was our first full day not doing community service. First, we did a tour at the awesome Mardi Gras World. We got to see all the floats and props. Next, we had Po-boys at Peck’s for lunch. Lastly, we went on a cool swamp tour and saw wild boars, a baby alligator, and a snake. When we got back we had pizza for dinner. Saturday was a fun day.

We went to the Whitney Plantation. Here we learned a lot about the lives of the slaves. After watching a quick orientation video in a church from the 1700s, we went around the plantation, and read names of all the slaves. There were some short stories about some of the days of these slaves. We also saw where they lived, worked, and basically spent all of their lives. The slaves built their own houses, and they were tiny spaces. We also went into the “Big House” where the owner of all the slaves lived. After we finished our tour we went to Voodoo BBQ for lunch, which was very good. After that we went to the French Quarter to go souvenir shopping. We went to Jackson Square to do this. After that we went to Cafe Du Monde and got these French donuts called beignets. They were really delicious, and had a lot of powdered sugar. After that we went to Dat Dog and ate some hog dogs. They even had hot dogs made from crawfish and alligator. After that we went back to our cabins and packed up, so we can leave tomorrow 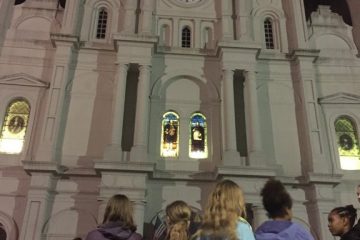 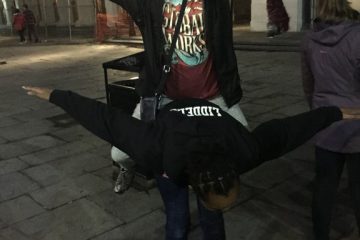 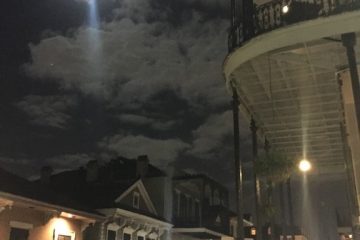 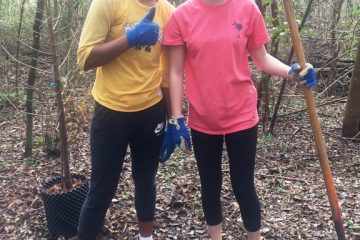 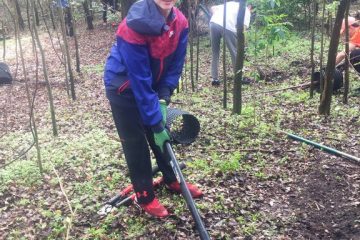 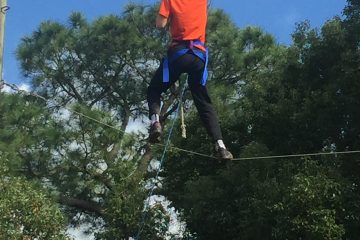 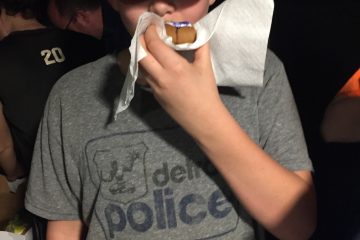 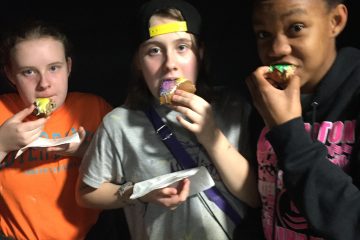 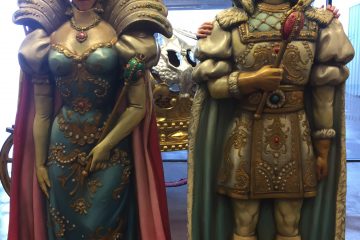 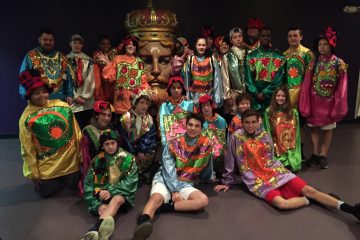 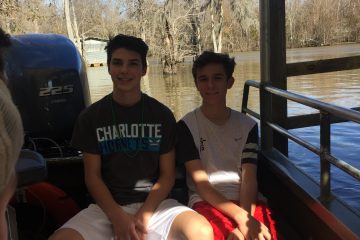 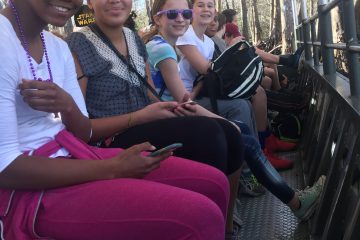