Meet Our 2017 Ambassadors: Catherine is going to Cuba!

Catherine Rutherfurd is from New York City and expects to graduate from high school in 2018. Her maternal grandfather is Cuban and came to the United States in 1961 as a part of Operation Pedro Pan. Visiting her grandfather in Miami piqued her interest in Cuban culture and the Spanish language.

Last spring, Catherine lived abroad in Madrid, Spain and is currently taking AP Spanish. Her school, Convent of the Sacred Heart, has a large network of schools throughout the world, so she was able to host a girl from a Sacred Heart school in Madrid for three months and later live with the girl’s family for three months. In Spain, she honed her Spanish language skills and learned to live in a different culture. Her trip to Spain made her curious to see even more of the world. Going to Cuba would help her learn more about her Cuban heritage as well as contemporary Cuban society while supplementing her command of Spanish. Catherine’s true passion is cooking. She loves to cook for her family and hopes to be a chef when she grows up. She plans to expand her knowledge of different cultures to inform and inspire her cooking. Catherine wants to study anthropology in college for the same reasons.

In addition, Catherine has worked every summer since she was thirteen years old. She began working at a tech investment company in New York, and subsequently worked at two different startup app companies. She worked on both the technical side as well as marketing and used social media to promote the apps. She realized that working in tech may not be her future, but she loved working and learned a lot. Last summer, Catherine worked at an event design company where she helped do everything that was needed to create beautiful events. She also worked at an empanada stand called La Sonrisa, which has locations throughout Manhattan. Working at the empanada stand gave her a taste of the chef’s life, and was another opportunity to practice her Spanish because many of her coworkers and customers were Spanish speaking. She plans on interning at a restaurant this summer as well. Additionally, Catherine is also excited about the service aspect of the trip to Cuba because she volunteers at her local soup kitchen every Friday and went to Chicago last summer on a Food Deserts service project.

Last but not least, Catherine has played varsity volleyball for the past three years. She participates in her school’s environmental club and is the president of her school’s chapter of Amnesty International, the human rights group. On the weekends, she competes with the school speech team. Her speech category is called Original Oratory, in which she writes a speech, memorizes it, and performs it throughout the year. Catherine believes that the opportunity to participate in the Global Works Ambassador Program would allow her to contribute to many aspects central to the mission of the Program and learn a lot about her Cuban heritage and its culture. 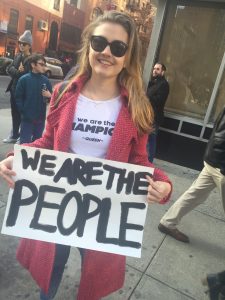