Early Breakfast. We had a fruit salad with a drizzle of chocolate sauce, an egg omelette, and a choice of bread with queso blanco and fried plantains!! It was a wonderful way to ease into the delicious and sweet Ecuadorian cuisine before a day of travels!!

After a refreshing night at La Luna, we embarked on our day of shopping at Otavalo. But first, we celebrated Susan’s birthday! At Otavalo, we experienced the local culture and bought some artisanal goods, including bracelets, pants, sweaters, and silver jewelry. We practiced our bartering skills and got many opportunities to converse in Spanish. We then worked for a bit on our group projects and tried to find a unique fruit in the market. We found pitaya (dragonfruit), guanábana (soursop), and achiotillo (lychee). They were all delicious! Then, we headed to our hotel overlooking the beautiful Lago Cuicocha. We hiked down to the lakefront to observe the celebration of the summer solstice (inti raymi).

This morning we woke up at 6 for a 6:30 breakfast. We then got prepared for our 6 hour hike that was 8.4 miles long. The first 2 hours were a steep incline up the side of the crater. The stairs were the most tiring and every time we looked up the trail and saw the stairs we would all moan. The crater was formed when a volcano erupted. The water in the lake is from a glacier and has sulfur in it, so no animals were living in it. Then two islands were formed from a second eruption. The hike was very long, but as we walked along the crater, we were able to see the island from a different perspective. We also learned about different plants and how they could heal parts of our body. We discovered many new bugs along the way as well. Currently, we are on the bus going to our host families.

Today, the first full day with our host families, started with a nice breakfast prepared by our host mothers. After eating breakfast we met at the community store when we then walked to the community house where we learned of the service we would be doing for the day. We split up into three groups, those working on the trails; those making small wooden signs; and those making cheese. Starting work at around nine we worked until about 12:20 for lunch at 12:30. After eating lunch we continued at our jobs until 4:00; however, the group working on the trails changed tasks to helping out with the garden. We then met up to play a game of soccer with the locals were we split up slightly, but the team with more of us won 7-6. Returning victorious to our home stays, we ate dinner and off to bed.

Today in Yunguilla, we continued our homestays and activities. Some of us did cheese making , some creating stairs for a trail and others gardening. These activities, all for the community, gave a sense of appreciation, pride and fun. We also tried new foods like mermelada de mora o de uvilla, galletas María, queso fresco, tostadas y mucho más. We learned how to wash our clothes by hand and after played an intense game of soccer with the locals, with a beautiful view of the mountains behind us. Overall today was full of fun, hardwork, beautiful sights, and new experiences.

We started the day by splitting up into our work jobs. The three jobs were jam, cheese, and making the trail. We were assigned to jam making and began the day by peeling beans. We did this so that the chefs could make avas which are toasted beans. We then began to label the jars of the jam so that they could be taken to the store. Taj stamped the date of production the expiration date, and the lote. First we had to put a green seal tape around the top of the jar and the labeling sticker which tells the customer what they are buying. Ry and Emily put the jam in the jars and also sealed the jars by putting them under boiling water. We ended so we could pack and then go to the bonfire later that night. The bonfire was very special and we played volleyball. Rolando started by showing his gratitude and a few members of our group including Elsa, Susan, and Max thanked them in Spanish. Then each family, one by one, presented bracelets that said Yunguilla on them. We had s’mores after which had a lemon taste to them. We then began to play volleyball again which was so much fun. We all said good night and went to sleep after.

We had our last meal in Yunguilla with our host families, and headed towards another volcanic crater named Pululahua. Here, we learned about the vast biodiversity living throughout. This volcanic crater is one of two where people live, the other one being in Africa. We also learned about the different indigenous people and Europeans that moved through the area. Next we drove back to Quito, where we settled into the hotel where we spent our first night.  After free time we gathered for a delicious chicken and rice dish. Carmen then presented a slide show about the biology, geography, and history of the Galápagos Islands. We will be visiting island Isabella and Santa Cruz. After some downtime we gathered for lasagna dinner and are preparing for an early morning flight.

Today, our first day in the Galápagos, was filled with underwater adventure and exploration. After a nice breakfast in our hostel, we quickly picked up snorkeling equipment from a local spot and walked along a ten minute trail to our first snorkeling site. This beach had a lined-in body of water, which was a perfect location to teach for first-timers and prep snorkeling experts! The morning expedition featured a wide range of fish, including star-fish! We rested a bit on a neighboring beach before a nice lunch at our favorite outside restaurant. The Sweden-Germany game was playing and we got in a heated conversation about the intricate system of probabilities in each country’s prospects. A boat ride followed, and we saw blue-footed boobys hunting for their own lunch. We got a better view of the birds, and their bright-colored feet, later on in the ride. We walked along an island teeming with piles of iguanas and red-orange crabs, and then we had our second round of snorkeling in a neighboring body of water, where we saw sea turtles, schools of fish, cute little Galápagos penguins, and even a (small and tame) shark! We got some free time before dinner at the same outdoor restaurant, though we were disappointed that Miss Ecuador was playing on the television rather than another intense World Cup game. Now, we are preparing for an energizing night’s sleep before our early rise tomorrow for a second day of snorkeling.

Today we had two amazing activities planned. After breakfast, we traveled to the pier for an hour long boat ride to the túneles (natural tunnels formed by lava flow) where we walked along the bridges formed and snorkeled. We saw some really cool animals such as sea turtles, fish, and sharks. Later that day, we drove to the tortoise breeding center to observe some tortoises in a habitat created by the national parks. We learned about the differences between that habitat and the wild, and about the nesting process. To bridge the two activities, we talked about the similarities and differences between the sea turtles and giant tortoises. On the walk back to the hotel, we saw some flamingos in lagoons along the way. We then got dinner and bought some souvenirs before going to sleep.

We started the day with a relaxing breakfast before packing up after two wonderful days along the coast. We headed towards Sierra Negra, the largest active crater volcano in the world. After a short drive to Campo Duro, we took a two hour long hike along the rim of the crater. We learned about invasive species around the volcano, specifics about Sierra Negra, and met some friendly travelers. We had a quick lunch back at Campo Duro and then took a walk around the premises and learned about all of the plants on the site from our guide, Fernando. We then settled into our tents and relaxed before having a group meeting and enjoying a delicious dinner. After sitting around a bonfire and playing some bonding activities, we headed off to bed. 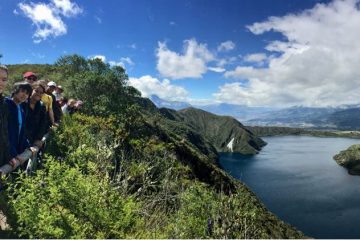 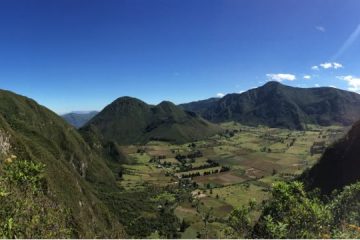