I didn’t sleep much during the three-ish nights before I left for Nicaragua. It was my first time traveling internationally unless you counted the country I was born in (which I didn’t- I was one) and I was admittedly nervous about the experience. I’d lay awake and think, “I don’t speak any Spanish!” or “What if I don’t bond with my travel group?” Either way, I had signed up for 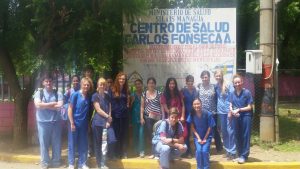 the trip nine months earlier and I was committed to going.

Twenty-four hours after I left my small Maine town, and my nervous anticipation along with it, I found myself riding in a tour van through the darkened streets of Nicaragua’s capital city of Managua. The roads were lined with small homes, ornate iron gates painted bright colors and empty soda cans peppering the yards. Here and there, a fruit stall sat vacant, waiting for another day to begin. A few cars bearing blue “Nicaragua” license plates passed us, and inside the bus, lively Central American music pulsed from the speakers. I was in a whole new place, and I loved it.

The ensuing days were a whirlwind of activity. We set up house in a lagoon-side hotel that boasted gorgeous views of the surrounding land and was built in tiers along the side of a hill. My group participated in ice breakers, visited an active volcano, shopped at an open air market, and learned the story of La Trudeca, the city dump where many Nicaraguans used to live and seek out an income. The visit was intense, especially coming from a fairly privileged neighborhood in the U.S., but the tour also emphasized a sense of optimism and resourcefulness that has helped the people in this neighborhood to make changes to their community. 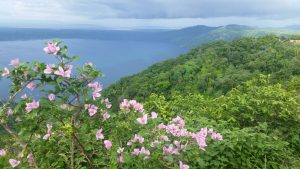 This idea of resilience and hospitality really never stopped as we continued on from Managua and traveled to other areas around Nicaragua. There were the six year old children who worked alongside us as we mixed concrete and hauled water for a playground in the rural community of Los Muñoz. There was the kitchen staff at our next hotel, who took time to prepare spaghetti and potato chips for us because they knew it was the 4th of July back home. There was the massage therapist at an alternative medicine clinic who would reach over with her hands and show me what she was explaining because we didn’t speak each other’s language. I came to admire the people of Nicaragua and to appreciate the value of working with communities, not for them.

After a week or so of moving around, our group participated in a four-night homestay in the rural region of Peñas Blancas. While there, we got the chance to see what daily life really looks for many Nicaraguans. It involves cooking over wood ovens and doing way more things by hand. It involves leaving half an hour before you need to be anywhere because you are walking down a rocky dirt road (but most people won’t care if you don’t arrive exactly on the dot). It involves putting on your rain boots and trudging by flashlight up to the outhouse because indoor toilet systems are a luxury for many rural families. It involves forming strong bonds with your neighbors, relatives, and community. I found it relaxing to lead such a simple 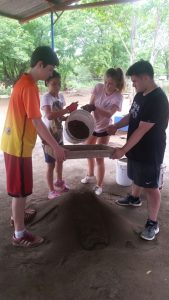 lifestyle, and my host family welcomed me with smiles, delicious home cooked meals, and plenty of time to discuss each other’s cultures and backgrounds.
There is so much more that I could say about my homestay and about my trip in general, but I will not in the interest of time. I will say that there were some moments that challenged the group, and some moments in which I missed my life at home, but traveling to Nicaragua proved to me that it is when we are out of our comfort zones that we grow. My experiences in Latin America taught me how vitally important it is to look, to listen, and to seek to understand each other and our world. If you are thinking about going on this trip, don’t be shy. You’ll be all right, even without that Spanish. Promise. This trip focuses on Premed and Public Health, so if you want to be a doctor, this is a great place to expose yourself to the field of medicine in the developing world. Be ready for lots of clinic tours and chances to talk with doctors. If you don’t want to be a health professional, still go for it. I did not go with the intent of being a doctor, and I still don’t intend to. Nonetheless, the insights and experiences that I gained while in Nicaragua have been super valuable in stretching my view of the world and making me a more courageous and understanding human being back in my everyday life.