Today, we went to Fort de France. We walked around town, saw the sites, had lunch in groups and went souvenir shopping. Then, in the afternoon, we went to an elementary school. Both groups of students were really positive! There was a lot of language practice and cultural exchange.

On Tuesday, June 19th, we had a bus day, driving through the tropical rainforest and all the way up to the north of island to see the volcano. Along the way we stopped at a church, Église de Balata, and a natural spring where we got to drink coconut water from a real coconut. At the end of the rainforest road, we arrived in Morne Rouge. But the weather wasn’t so good so we didn’t see the whole volcano. We had lunch on the mountain and because of the altitude, we were actually in a cloud. Then, we visited St Pierre, the town destroyed by the eruption in 1902.

Today, Wednesday, June 20th, we went kayaking. It was fun and stressful at the same time. We had lunch on an island called Petit Ilet. After kayaking, we saw a pottery demonstration and some of us bought bowls and mugs made from clay in the area. We walked around the pottery village and bought some more locally made souvenirs. Then we had a delicious cake in one of the best patisseries on the island. Nobody wanted to leave.

In the morning we went to the Pierre Cirille elementary school. The group was split into 3 work stations (dance, games and drawing) and spent time exchanging with the local students. They played the drums for us and we had a little snack together. In the afternoon, we visited the Banana museum. It was very interesting and such a pretty place. We learnt so much about bananas. We even got to taste banana ketchup. Weirdly tasty.

Today we woke up to rain, thunder and lightning. So we had to change our plans Slightly. In the morning we went to see a seashell museum and we were amazed at all the random data we learnt on seashells. They even had stuffed sharks too. Some of the shells were so pretty, they looked like jewelry or broches. We each got a free shell to take home. After, we went surfing. On the road to the surf, we stopped to discover cap 110. A memorial with big white statues. They are in honor of a ship wreck that killed many slaves. Then it was surf time. Surfing was amazing. Very physical. But we had loads of fun. The surf teacher, Jason, was from Trinidad. In the evening, we had our celebratory dinner in a restaurant by the hotel. Some of us had mussels, or conch. We all then finished with very good home made ice cream. 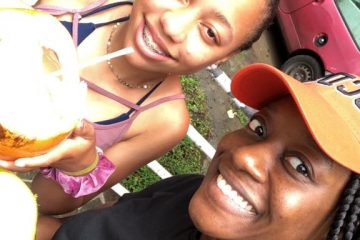