We landed in Paris in the morning exhausted from our flight be excited for the adventure ahead of us! From the airport we go on a bus that took us right to our hostel so we could drop off our bags and freshen up a bit. All of the girls and I got our things and went into the closest bathroom to change but little did we know we we using the men’s restroom! A man walked in and was quite surprised to see five girls brushing their teeth, we had a good laugh about that on our way to the Notre Dame. The Notre Dame was our favorite part of the day. It was so impressive and absolutely stunning, we got to climb all the way to the top to get a view of the whole city. The climb up was tiresome but fun and totally worth it. After the Notre Dame we went out to get lunch and then brought it back to our hostel. We decided to rest for a little bit and then do some shopping around our local streets.Eventually we ended back up at the hostel where we ate dinner together, then to get some more practice with the language we went to get some dessert around the corner in a small group! Since we were so tired we ended up just bringing the pastries back to our room and then heading to bed.

The second day in France we woke up and had a French breakfast which surprised us all at how different it was from American breakfast. Our French breakfast was much smaller than breakfast in America and it consisted of mostly bread. After breakfast we walked to the Louvre where we observed the Mona Lisa and many other beautiful pieces of art. We then ate lunch at a nearby restaurant in the garden of the Louvre, the Jardin des Tuileries. After that we took a metro to the Eiffel Tower were Ethan prom-posed to Ally and we also witnessed a wedding. Many of us took photos and we went onto our next adventure. We went to dinner at a very popular restaurant, I ordered beefsteak and fries for my meal and a chocolate eclair for dessert. Some people even tried escargot! The food was delicious! We then went on a boat ride on the Seine to see all of the illuminated buildings at night. We saw the Eiffel Tower lit up, and we even got to see its lights twinkle! Then we went back to the hostel to hit the hay, it was a late night!

When we woke up this morning we had to get ready quickly and rush over to the metro with all of our luggage. After a quick metro ride, we got on a really nice train (TGV: train à grande vitesse) that drove us two hours to meet another train (a regional one). In the process we ate many croissants and baguettes; we also drank many cups of coffee. We had lunch and I ate a ham and cheese sandwich on a baguette. We rode another two hours on the second train which led us to two Mercedes Benz vans which we rode to finally meet our host families in Carcassonne! When we got to our destination, our host families all slowly trickled in and we got to meet them as they came. When I got in the car, we tried to talk to them as much as we could and our parents had to learn to talk much slower. When we arrived at home, we got a tour and introduced ourselves and learned a lot about each other. We have two younger host brothers who are very funny and our host parents are very nice! For dinner our host mother cooked us homemade rotisserie chicken and potatoes which were very delicious, that was followed by an offering of ice cream and pudding. I ate chocolate pudding. We then showered and went off to bed.

After we got off at the meeting point we had to unpack our bags from the vans. My host dad (Laurent) and brother (Mickael) were there already. So Rose, Ethan, and I introduced ourselves to them. It was a little scary at first because we were nervous. But after meeting them we started talking about basic things like where we were from and how long we’ve been speaking French. Luckily, they speak some English, which is good for Ethan because he speaks Spanish. After a little bit of eating at the meeting point we left with our host parents. We got into the dad’s car and left for their house. On our way there, we saw the castle in the distance. It was a really pretty sight. After we arrived at the house we were shown our rooms. We all got separate rooms which was a nice change of pace from the hotel where we were all in one room.  We put our luggage in our rooms and unwound for a second. We met the mother (Christine). She greeted us warmly and asked us if we want something to drink. We responded with what we want and the father showed us their game room.

It was another part of the basement. He showed us the foosball table which is called babifut (baby foot) in France. We get to playing, two per team, and it becomes clear that the Europeans are better at the game than we are. It is Ethan and I against Rose and Mickael. Mickael beats Ethan and I pretty easily, while the parents are playing pool next to us. This goes on for a while and then the dad hops in for Rose when she goes to play pool with the mother. He is even better than Mickael. At first it’s Ethan and Laurent against Mickael and I. Mickael and I lose. Then Mickael and Laurent switch teams and I finally win. We go and play pool with Rose because the mother is preparing dinner. We play pool for a couple rounds and then it is time to eat.

We start off with a cold salad type meal and bread. The bread is excellent. After that we had sausages which were also very good. We then had a cheese platter and by that point we were stuffed, but we couldn’t refuse French cheese so we had some with bread. There was a huge variety to choose from. From goat cheese to the strongest cheese. It was very tasty. After that we presented them with our gifts and went to sleep.

On Monday, we started the volunteer project. We drove up into the hills on a sunny day after visiting the castle, and gathered in the tall grass beside irises and sweet smelling trees to start restoring an old section of the French Camino trails. There we met an older French couple and few French students, and together we convened on the hillside to receive directions from the couple. It was a moving speech, I’m told, about the ancient history of the trails and our own personal Camino-esq perseverance. Had I understood a word he said, I’m sure I would have loved it.

We began by clearing rubble and removing weeds from a crumbling stone wall by the side of the trail. I enjoyed the work and so did others, and my favorite part was how hidden in the wall there were old pieces of painted pottery and glass, to be found and collected like little treasures. The work was fulfilling, and at the end of the afternoon we returned home to our host families exhausted.

Today was a very eventful day! Due to the rain we got to sleep in a whole extra half hour, which, after many long days, was nice. Noah, Rose, and I walked with our host dad to the meeting point and met there at 9:00. Everyday we pass by three dogs. The first two bark very loud as soon as we walk by, and the other one only starts to bark when they hear the first two dogs barking. It’s pretty amusing. We got into our vans to head to some really cool caves. (I chose the Mercedes). We couldn’t work on our project in the morning because it was raining which made me a little sad, but it’s okay.

When we got to the caves we walked up a very steep hill. With all of our legs dead, it felt like ages. As our tour guide started to speak to us about the very cool caves I was able to perfect my “smile and nod”. I could tell that our tour guide was very funny, although I speak no French. When we came out of the caves we sat down and had lunch which, for me, consisted of a ham and cheese sandwich with Mayo on a baguette. I then had a chance to witness my very first squat toilet. Not only was this odd, but it seemed as though it would be easy to fall into one of those therefore I decided to wait.

We were finally able to go work on our service project. I was thinking it would be muddy because it rained all morning and I was fully prepared to wear muddy shoes the rest of the trip. Luckily it wasn’t muddy at all and I even got a nice suntan. We started right in on trying to rebuild the wall on the Road to Santiago and today we had a rope to help us make the wall straight. This made it a lot easier than yesterday. After moving an enormous amount of rocks, our wall was complete and it actually came out nice. We walked down the road a little ways to see what the past Global Works group built and did and then we took the vans back to join up with our host families. On the way home we saw the dogs again and I was greeted by the family cat. I then proceeded to lose at foosball 5 times in a row. 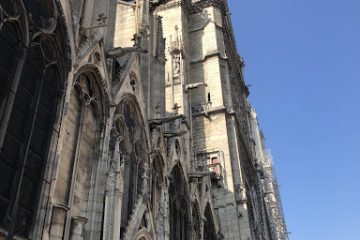 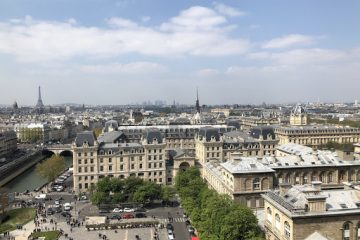