This was our first day in Nepal, Kathmandu, for some of us it was the first time, and some of us were the second time visitor of Nepal We have visited a lot of famous and traditional interests and sights, for instance, the Dubar Square, the monkey temple, the living goddess and the crematory. For people’s first impression, Nepal was country full with religious and beliefs, it could be seen through people’s actions and the buildings which was all decorated with Nepal’s cultural and religious elements; this have made us fully immersed in the authentic Nepal’s culture. For those second visitor, it was very interesting and shocking to see the changes that was brought by the previous earthquake; through the wreckage of the buildings and temples we could imagines how serious the earthquake was and how much influence did it brought. However, I was very glad and gratified to see that Nepal people are very resilience and mentally strong that I was totally amazed by their recovering speed. Although we knew that most of them have experience that huge tragedy and may had also lost their relatives, they are still being very positive to life and are trying their best to make a living. Further more I believed that it was the religious and the belief in their hart that have made them so strong and relicense towards difficulties; the belief was the pillars in their heart and that was the thing that modified Nepal people. However we do see that many Nepal people are still suffering a great poverty and we feel sad and sympathy for them when we see old skeletal figures dressed in rag lying on the side of the road, and there are children chasing after me begging for a little piece of cake. We felt sorry for them and this have also encouraged and motivated us to do more work helping them.

This is our second day in Nepal. We have spent most of our time traveling from Kathmandu to Bandipur. On our way we stopped by a river and have gone rafting in the river for two hours. It was the first time rafting for most of us and some of the people had taken a big risk doing this. Along the way we have experienced rapid and strong water current and some students unfortunately have dropped in to the river, but we have all admitted that we had a great time rafting and are expecting more rafting in the future. We arrived in our new hotel at 6 pm and we are now expecting to see the beautiful sunrise and the mountain tomorrow morning.

In these three days, we did the house-building project. We started from nothing and we were doing all kinds of work with the local Nepalese. Carrying sand, cement and bricks onto the hill, digging soil and clearing the field for building, stirring concrete, build the base and walls of the house, place the windows, fill the ground with broken bricks and cover it with cement. It was a hill covered by grass and we build a house there with the power of teamwork. It was extremely hot in sunny days and we went through it. Accompanied by the cool air sent by the wind, we were super-efficient in the afternoons and we finished the most parts of the house. We became strong workers in the 3 days and everyone in our team tried their best. We showed the strength of teamwork and build working chains in the process. We found out the power of working like a team and we believed we learned more about each other. After the trip, we will also be a better community in Keystone. We started from 0 and we all felt tired. But we also felt happy because we almost finished this kinder garden. For me (Jack), I tried all the things and I think it’s really exciting. I imagine this to be basketball training so I worked very hard. As you see, we helped each other and we tried our best to finish this house. We have some special skills to solve the problem like how to moving bricks efficiency. We have a “scientist” named Cassini. He tried many new methods to work on one thing and so on. That’s why even we are tried we also felt happy. For me, this is a best experience. This is my second time to go to Nepal for service. So in these three days I also talked with the local children and give some gift for them. The Nepalese people are really hard-working, even the ladies can carry a full basket of bricks. The local workers who worked with us are very skilled and they taught us a lot in the process of building in these 3 days. Even though we can’t do the work like the professional workers, but we were still very helpful. We speed up the project quiet a lot and cooperated very well with local workers. This project is not only helping them building a single house, but it’s also a learning process. The room we built will be a kindergarten classroom for young Nepal kids. We appreciate that the school provided us an opportunity for us to have such a new experience and learn from it. We felt like we can actually do something for the local community and the skills we learned we be very useful in the rest of our life.

We spent the entire day yesterday touring around Kathmandu. Our first stop was the Durbar Square in the Bhaktapur district of Kathmandu. We toured the sights that we saw last year, and lots of differences could be obviously observed. There weren’t as much as tourists as there were last year. The square looked desolate with some crazy Nepalese drivers growling their motorcycle engines and driving insanely. Quite a few of the ancient buildings in the square was wiped out completely during the the earthquake. We took a group-picture where we took a group-picture last year, and before the earthquake. One of the temples on the background this year was missing.     We ate lunch at the same place where we ate last year, where we had a view of the entire Bhaktapur area. On the way to the bus, we saw quite a lot of tents, and people are still in them. One of the cover of the tents had the sign of “USAID” on it, and the bottom had the sign of “Chinese Red Cross.” I believed it emphasizes the strong collaboration between different countries when facing unprecedented natural disasters, and even though we have disagreements, but we’re united in helping the world to be a better place and helping those who are in need.    Earlier today we went to the training base of “Circus Kathmandu”, and did some basic circus training with their crew, and that ended our tour in Kathmandu.    These kind of once, or twice in a life time experience are what these trips are for, and shall our lives be enriched. 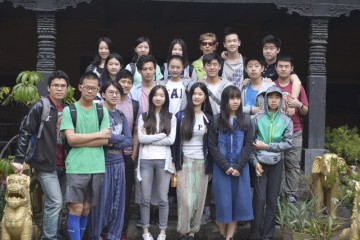 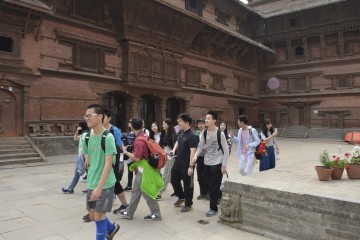 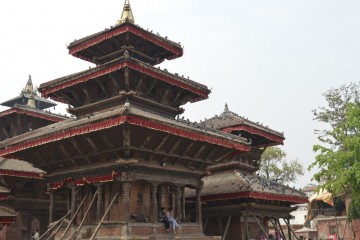 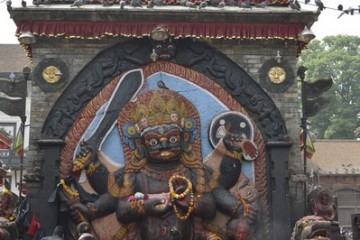 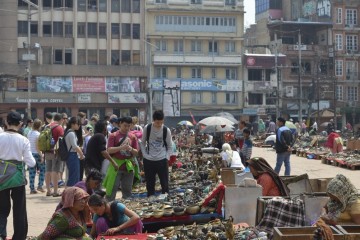 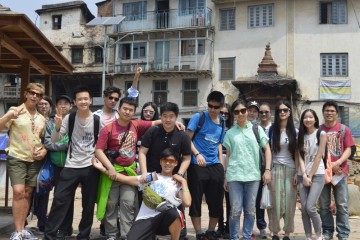 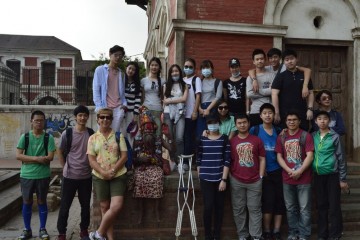 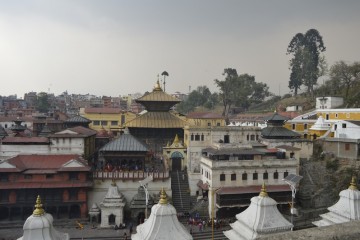 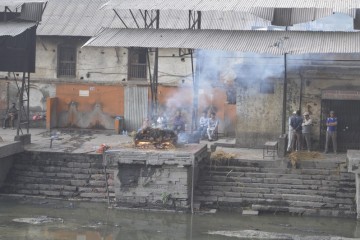 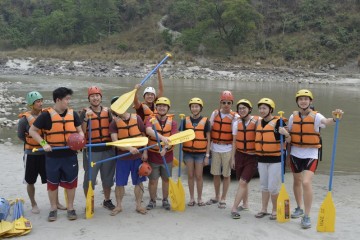 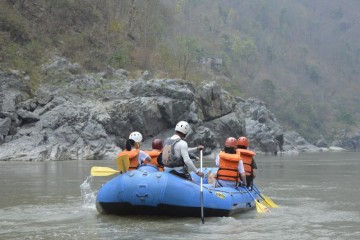 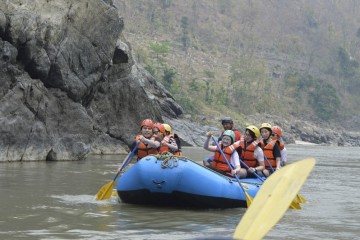 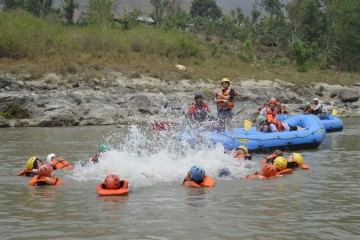 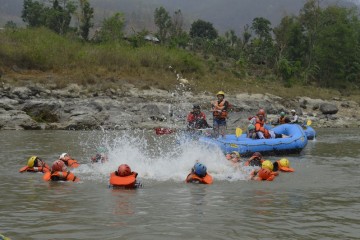 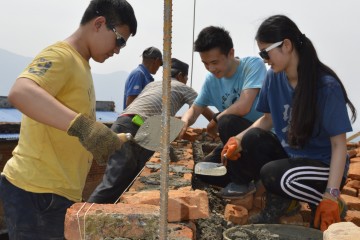 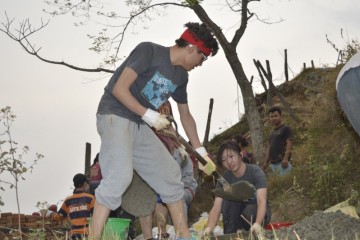 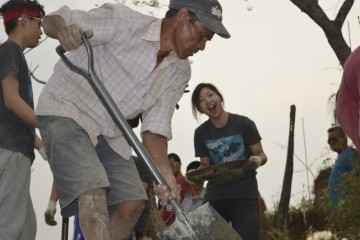 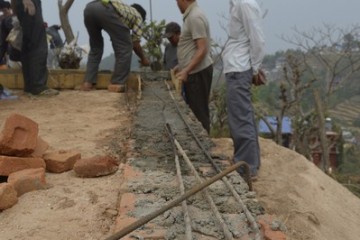 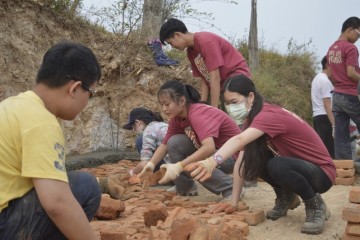 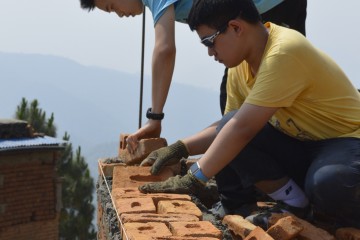 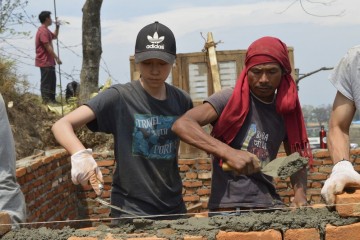 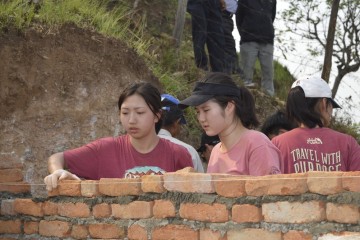 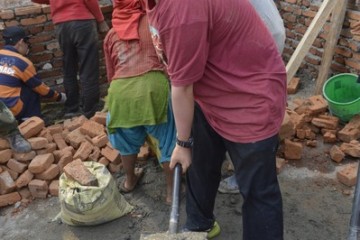 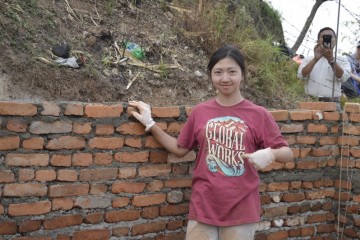 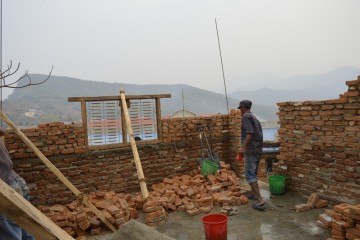 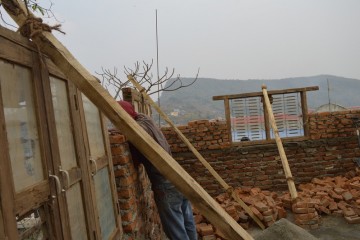 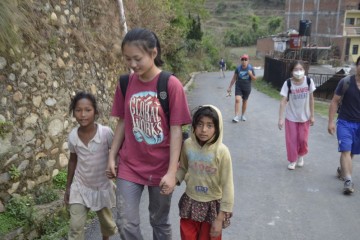 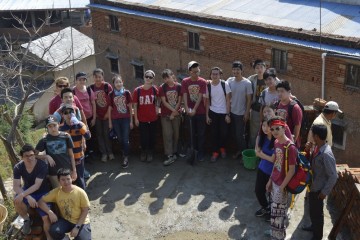 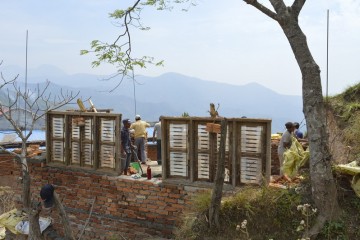