This morning our excited group of 19 seniors, juniors, and sophomores ventured off to take on Puerto Rico. We all arrived at school around 5:30 and boarded our American Airlines flight at 8:40. The four hour flight was a breeze and we finally arrived in Puerto Rico to humidity and sun compared to the cold New Jersey weather. After we had a chance to meet our Global Works leaders, Lindsey and Fabricio, we were picked up by a coach bus and were on our way to San Juan, Puerto Rico. While touring old San Juan with our native tour guide, Alvin, we learned about the history and background of the rich port known as Puerto Rico and the diversity that forms the indigenous population.

We had a chance to visit some of the oldest churches and residences in the Western Hemisphere such as the Catedral Metropolitana Basilica. As a group, we also had a chance to tour the Castillo San Felipe del Morro, an older fortress ran by the National Park Service after lasting two World Wars. After a long day in the sun, we had some time to eat a lunch of rice and beans and then we went shopping at the local artisan craft stores. Afterwards, we commenced our day with our ride to the big yellow house in Cerro Gordo where we are staying for the next four days of our service trip. We are very much looking forward to the days to come and the service we will be able to accomplish in Puerto Rico!

March 24, 2019
Today we started our day with a lovely breakfast. Afterwards, we loaded up the bus and headed for the worksite. There, we met Noel, Angel and William, who led the project. Sonia (and Calvin) did an excellent job translating for us while William gave us his welcome speech. We then packed up our snacks and gloves from the bus, and were put to work making concrete from cement, water, rocks and sand. There were iron rods and pipes already set up, so we had teams scooping the components for making concrete and putting it in the mixer, teams putting the finished concrete into buckets, and an assembly line to pour it. Half way through the work day, we trekked to Maria’s (Angel’s wife) house, where a delicious FEAST was waiting, consisting of beans and rice, and chicken. After lunch, we gained momentum and began to work in a fashion that was more efficient than ever. We were able, much to the surprise of everyone, to finish laying the foundation for the floor. The owners of the house were very grateful for our work. For them, it wasn’t just a floor. This floor was the beginning of the addition of a new room which would allow the wife’s daughters to move back in with her. Once we returned back to the house, we headed for the beach where we enjoyed the refreshing and clear water. Afterwards, we enjoyed a nice dinner and a great birthday celebration for Rebecca! She’s 16! For our final activity we sat in the common area, doing a recap of the day and shouting out specific things we noticed and wanted to appreciate. We all agreed that today was most definitely a success!

Today we went to Villa Del Río in Vega Alta again but we worked on Bolo’s home. We continued to make concrete but today we focused on making columns. We had a group shoveling materials to make the concrete, a group shoveling the concrete into buckets, and a mass line passing the buckets to Angel and other men who filled the columns on the roof. We also had a new job, the bucket catcher, who passed the empty buckets to the concrete shovelers. We had the mission to complete the job by lunch time and we were more motivated than ever. We filled and passed our buckets enthusiastically. We had a little set back when we ran out of cement, but we quickly received more and were able to not only finish the columns but help work on another home. After that, we had a nice chicken and rice lunch at Maria’s and made our way back to the yellow house. We all went to the beach and had fun swimming in the water and playing football. It was a great day. We finished our night with a pizza dinner and a documentary on Puerto Rico and we couldn’t be more excited for our last work day tomorrow.
Courtney, Safia, Jack

Today we started our last day of service in the town of Vega Alta. We quickly ate breakfast, which included french toast, eggs, and fresh fruit, and in high spirits headed to the work site. Today, we would be working on Angel and Maria’s house. Angel has been helping with all the other projects and Maria has been cooking our lunch everyday, so it was really nice to be able to help them today. Unlike the past couple days where we had a machine mix the cement, today we had to mix the cement by hand. This was a very tedious process that William took a lot of time explaining.

First, we had to pass up 10 buckets of sand, 3 bags of cement, 8 buckets of rocks, and 5 buckets of water by a human chain. After each ingredient was added, we had to meticulously mix it, making a moat for the water. Once this was completed we would pass the filled bucket of cement up to the other workers. We ended up making 10 batches of cement and filled 5 columns and beams.

It wasn’t all hard work, though; during our breaks we turned on the music and sang and danced with Angel, Maria, Willy, and the other workers. They were particularly enthralled by Hunter and Christian’s dancing, with Maria secretly recording Hunter and Christian busting down. Finally, after a little bit of work after another great lunch cooked by Maria, it was time to say our goodbyes. The night before Sonia had helped us prepare something in Spanish to say to the workers to express our gratitude. Willy, Angel, and Maria also expressed kind words thanking us for our working and saying that they will never forget us. We took many pictures (and selfies!!) with everyone. They gave us Puerto Rican bracelets to remember them by, but we all know that this was an experience we will never forget.

After an exhausting first half of the day, we used the time when we got back to just chill. Some of us watched Drake and Josh while others were outside playing football. Tonight’s dinner consisted of leftover pizza, potatoes, chicken, and beef.

Finally, it was time for the long awaited Salsa dances. We partied up and began the lesson. At first we were a little stiff, but after we began to feel the music we began to loosen up. After practicing our routine for almost an hour, switching partners every so often, it was time for our final dance. Girls were in the middle of the circle while guys were on the outside. After doing the routine with your partner, the girls would turn to the next boy. By the end, we had it down. Catch us at prom with our newly learned moves.

Today was our last day in the Big Yellow House. We packed everything up and ate breakfast around 8 a.m. We left the house at around 9:00 to head to El Yunque rainforest. On the way to the rainforest we stopped in the little town of Palmer, where we shopped at the Caribbean Trading Company. We walked on the Angelito trail, a short 15-minute walk through the rainforest to the Mameyes River.  We were able to cool off in the Las Damas pool where there were many rocky pools of water that we climbed through, swam through, and even sometimes fell on. The water was so refreshing.

Afterwards, we drove back down to Los Kioskos at Luquillo Beach and had lunch at Terruño. We enjoyed a nice breeze at a restaurant that was right on the beach. The beach had clear blue water for miles out.

We then traveled to Casa Coral, where we were staying for the night. There was a pretty beach with a river. There was plenty of music and rocking hammocks. Dinner was rice, beans, tacos, burritos, and quesadillas from a local Mexican restaurant.

After dinner, a bus tricked out with flashing lights and loud reggaeton music picked us up and took us to a park in Fajardo where we boarded kayaks for a night paddle to a bioluminescent lagoon.  There are only five in the entire world and three of them in Puerto Rico. Any movement activated the plankton and made them glow. After kayaking through a channel lined on either side by hurricane-ravaged mangroves, we all regrouped in the Las Croabas Lagoon by lining up our kayaks side-by-side.  The tour guide talked to us about the bioluminescence and then answered our questions.  He gave us a few minutes to play with the glowing water, and then we kayaked back through the canal to board our ostentatious bus. It was our last full day in Puerto Rico but definitely was one to remember. 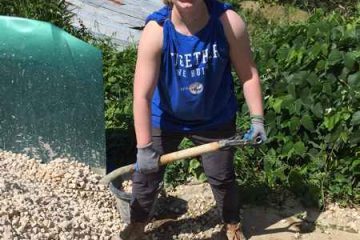 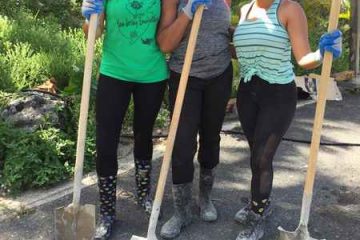 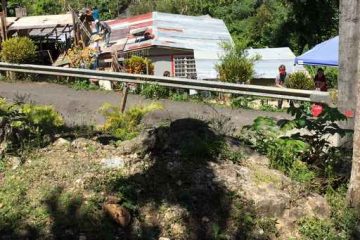