Natalie Reflects on her Sea Turtle Expedition to Costa Rica 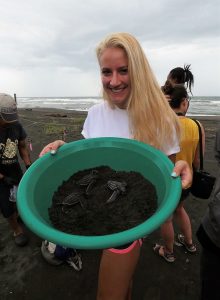 The Global Works Costa Rica Sea  Turtle Expedition was a fun filled program into the land of turtles! Starting off our trip with adventure we took a stop at a local cheese farm where we got to experience the process of cheese making. Starting with milking the cows to boiling then stretching the gooey yummy cheese. We then balled up this famous mozzarella Costa Rican cheese and bit into a warm delicious cheese string. We then went rafting along the river swishing and swooshing over the waves as we picked up a silver shiny fish into our raft! We then picnicked on the side as we enjoyed traditional Costa Rican food while taking in the view of the waterfalls and rainforest that surrounded us. 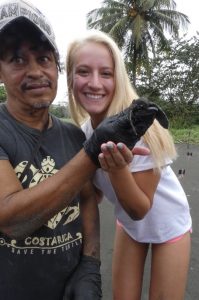 Further on in our trip we teamed up with Association Save the Turtles of Parismina (ASTOP), an organization formed in Parismina by the community to help the protection of turtles. Before this organization was created only 6% of turtles would make it to the ocean due to the leyendas or legends of the turtle eggs. Poachers would take the turtle eggs and eat them or use them as an aphrodisiac. Now because of this organization the turtle population is saved up to 68%. Joining along with this organization we took night patrols on the beach watching for turtle tracks and cleaned up the trash that had been washed upon shore. This program left me with a sense of satisfaction and amazement for seeing the difference we contributed to this community, turtles, and beach.

My highlight of the trip would definitely be the hatching and releasing of the baby turtles. Experiencing baby turtle birth as the turtles cracked out of their eggs for the very first time and opened their eyes while waddling, their arms and legs taking in the texture of the sand. 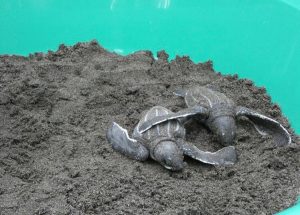 Once the turtles had awoken we brought the bin of sand in which the lay and set a path for the turtles to make their way down to the water. While doing so the leader of ASTOP released the turtles as we watched in amazement. He then turned, looked at me, and asked my name, “Natalie.” He pointed and named one of the baby turtles after me. I then watched baby Nat make her way into the ocean as she waddled down the sand. Baby Nat then fell into a tiny sand patch. As we gasped, all eyes on the baby turtle, wondering what would happen next, the most adorable thing happened.  I watched this baby turtle push itself up with determination in his eyes, lift his head high, and push on waddling down the beach to get swept up into the ocean to start its new life as a baby sea turtle.