Everyone met at the airport in Miami around 1:30 pm on July 13th.Everyone was a little nervous at first, but after a couple of minutes people started to open up and start to bond. We had a safe flight and everyone made it to the hotel still excited.On the second day, everyone awoke to a delicious homemade local Ecuadorian breakfast served with glasses of fresh cantaloupe juice, and native alpacas roaming around the fields in the hotel. After cleaning up, we ventured out to the Papallacta area where we enjoyed a delicious Ecuadorian lunch and a soak in the natural hot springs. After this, we drove to the city and experienced the authenticity of the Ecuadorian culture. We then came home to another scrumptious meal for a nice end of the day.

– by Maddie and John

Everybody woke up bright and early to catch a morning flight to the Galápagos Islands. The time on the flight and in the airport was great for group bonding. After landing, we grouped up and took a bus to the coast of Baltra. Once by the water, we crossed the exquisite cove with open minds. On the next island, we took another short bus to our final boat. On the rocky Pacific, many were nauseous and tired but because of our comradery, we survived and made it to our final destination. Once we arrived, the kind and generous locals took us to our hostal where we received our room arrangements. Dinner was spectacular, as we experienced true Ecuadorian cuisine. After dinner, we had a quick team meeting and then everyone started to prepare for tomorrow’s exciting adventures.

We awoke to a Ecuadorian breakfast after our first night in La Jungla. We talked over the schedule of what was to come today. After we all ate we hopped into the bus and were on our way to the tortoise breeding center, where we would observe different ages of the tortoise kept in specific conditions that suited their needs. After our peaceful walk through the haven we took a few pictures and set off on our nature walk were we saw a variety of terrain and animals such flamingos, iguanas, and poison apple trees. After our walk we went to a restaurant in town and got ready for snorkeling. We hopped into another bus and went to a remote inlet which served a a nursery for baby fish. We were greeted by a friendly sea lion on our way out of the water. We came back to the hotel where we had the option to go into town to shop before dinner or we could stay and rest. At dinner we had excess amount of smoothies and delicious food. Afterwards we had a closing meeting and activities and we went to bed.

This morning we woke up early to another Ecuadorian breakfast before hiking to El Estero and La Playa de Amor. Here, we saw many iguanas, some that even were relaxing on the trail. The beaches were beautiful alongside the mangrove trees and lava rocks. After, we took a bus back the hotel to prepare for snorkeling and lunch. The group split into two different boats and each group got to see wildlife such as turtles, manta raya, sharks, and penguins up close. The boats docked at a small island and we hiked around to view more iguanas and sea lions. The group then went snorkeling again and saw many sea turtles up close, alongside sea urchins, sea cucumbers, and gorgeous reef fish. Everyone enjoyed the water. Later, everyone relaxed at the hotel before dinner. After dinner, most went souvenir shopping, or bought more food. Back at the hotel, we had a closing meeting and finished with a few activities. Overall, a day well spent!

We began today with a much needed late start with breakfast at 9. Afterwards, we had time to hang out and pack for our snorkeling day before leaving at 11 for the pier. We were split up and boarded two boats for a bumpy 50 minute ride to Los Túneles. Once we arrived, we put on our wetsuits and grabbed our snorkeling gear to get ready for another adventure. As we swam through the lava rock tunnels we saw seahorses, giant sea turtles, white tip sharks, manta rays, a penguin, and a handful of colorful fish. We snorkeled for about an hour then got back on the boat for a lunch of fried rice. Then we had a short ride through the mangroves before getting off the boat to walk on a small island. It was full of baby iguanas, lava rocks, hidden tunnel and Blue Footed Boobies! Once we got back from the islands we had time to shower and hangout until dinner at seven. We then got back for a quick evening activity and then we packed up our bags for our journey to Campo Duro tomorrow.

-Michael B and Julia

Today we hiked up the active volcano, Sierra Negra. We started out in the clouds, it was like hiking through a hazy mist. We all got pretty damp, it felt wonderful. Along the trail, we learned about the invasive guava trees and some of the birds we might run into on our hike. Our tour guide, Pablo, taught us valuable information about the volcano and how it was active, how the caldera was 6 miles across, and other cool stuff. The last eruption was in 2005, we hiked up to where the latest lava flow had been to check it out. Here, among the sparkling ash gravel, a friendly mockingbird stopped by to say hello, he got within feet of us! After what felt like days of hiking, we reached a breathtakingly high peak where we could see for miles and the coasts on either side of Isabella. It was tons of fun and the view was phenomenal! After that, we settled into a new camp site called Campo Duro where we sleep in tents of two or three and are one with the wildlife of the Galápagos. Following a fantastic dinner, we headed out for fun and free time before bed.

– by Cole and Rose

Today we spent the day working in the tortoise preservation and the garden at our camp. After a good night sleep and bonding session in our tents, we put on our work gear, grabbed our work gloves, and ate a quick breakfast before heading out in our groups. We spent the rest of the day volunteering our time and energy into the soul of the Galápagos Islands. In the garden, we cleared the weeds along with harvesting the fresh produce that’s used to cook our foods. After working the majority of the day, in on and off rain, we all hit the showers to wash up after our hard day of work. For the remainder of the time we spent our time playing cards, playing frisbee, and resting in the hammocks. We wrapped up our night eating chicken and fish for dinner. Before bed we sat around a bonfire and sang camp songs while telling stories under the stars.

-by Matt and Sophie

At the early time of 7 o’clock, we woke up to the sound of roosters and the smell of plantain chips, one of the options for our final breakfast at Campo Duro. Afterward, everyone packed their bags and we headed off to the docks for a boat that would take us to our next destination, Santa Cruz. The boat ride was rough, but we enjoyed the cool water and beautiful views. Once at Santa Cruz, we were excited to go to the beach for a day of relaxation after a delicious meal of either chicken, sautéed fish, or pasta. We then spent the rest of the evening tourist shopping and eating our first individually ordered meal, in which milk shakes, smoothies, lobster, and steak were a popular choice. We finished the night with our daily evening activity, fruit lollipops distributed by yo’ girl, laughs, and unforgettable life lessons told by yo’ boy.  The deep discussions had everyone, including Leader Katie Morrow, ready for bed and the extensive day of traveling the group would face on the following day. With a scouts honor send off to bed – wrongfully executed with two fingers rather than three – the group said our final goodnight and fell asl……

Written by Jules, Jordan, and Spencer

Today we woke up at 7:30 AM in the lovely hotel, Hostal España. After having cereal and eggs for breakfast, we got on a 50 minute bus ride across the island of Santa Cruz. We then crossed a short channel on a ferry boat to the nearby island of Baltra, where the airport is located. On the airplane, people were playing cards, among other games, and taking powers naps and enjoying conversations with fellow group members. After arriving back at the hotel outside of Quito, we had closing reflections, where we wrote letters to ourselves to be sent a year from now. We sat in quite by ourselves for half an hour having only our thoughts about the spectacular last week and a half. After individually reflecting, we came together as a group for a final discussion where everyone in the group shared their favorite memory, their most impactful memory, and something from the trip to bring and work on at home. We then got on the bus for an hour to arrive at a restaurant in Quito that overlooked the city. The balcony where we ate displayed breathtaking views, along with a live band that everyone could sing and dance to. The meal came to an end after witnessing a beautiful marriage proposal. On the bus ride back to the hotel, group members reminisced in their once in a life time experiences. As the trip comes to an end, the group stays up and talks awaiting a 3 AM departure from the hostel to catch our flights back home to all of you.

Written by Shana and Hyla 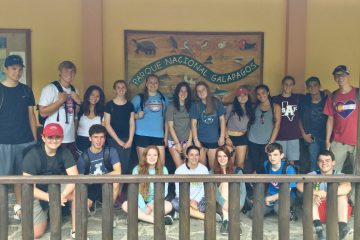 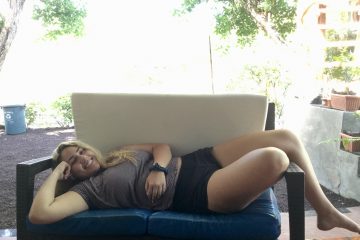 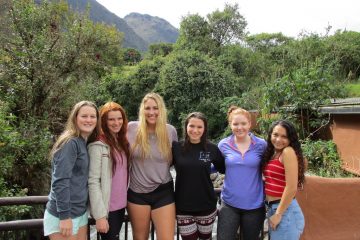 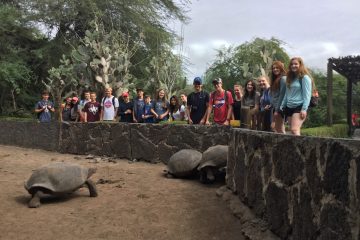 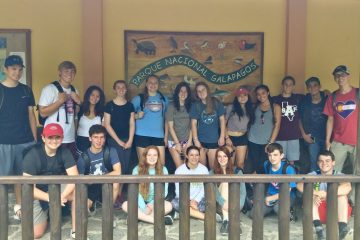 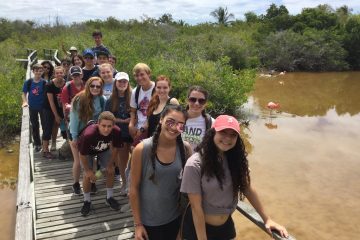 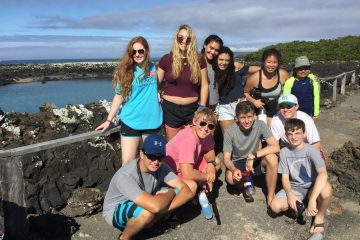 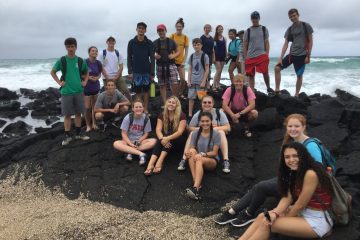 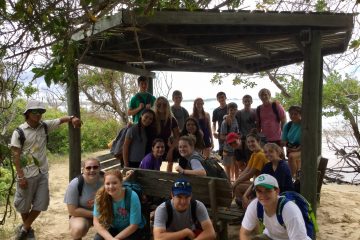 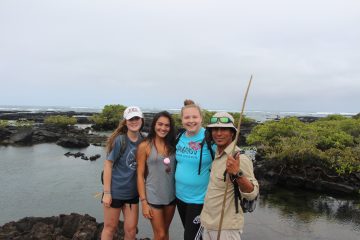 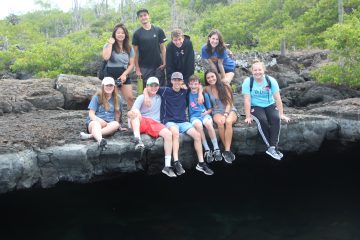 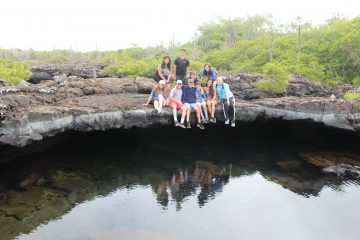 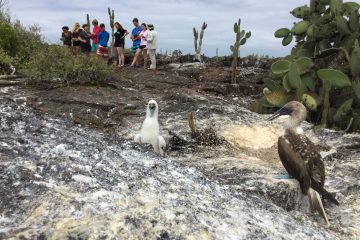 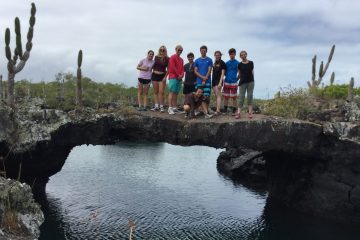 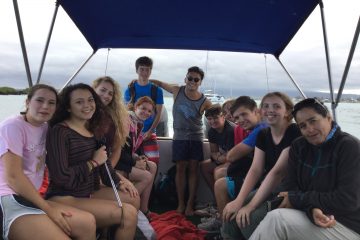 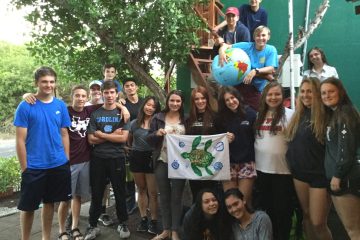 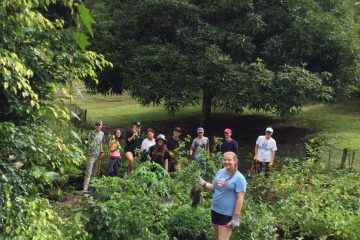 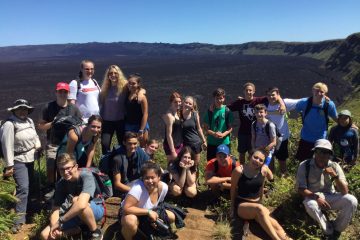 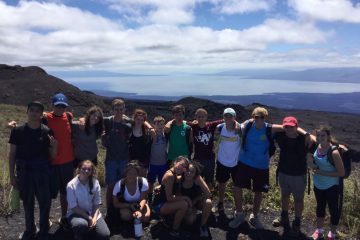 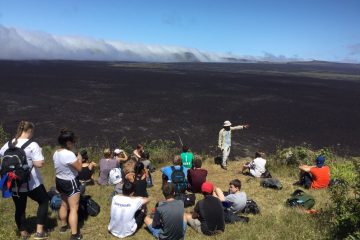 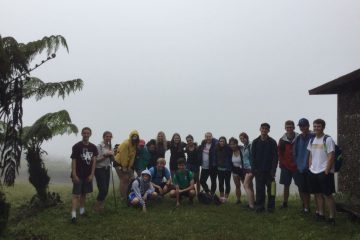 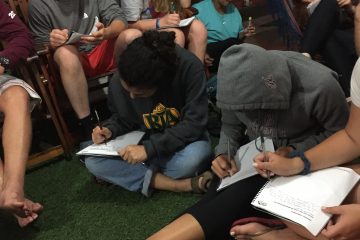 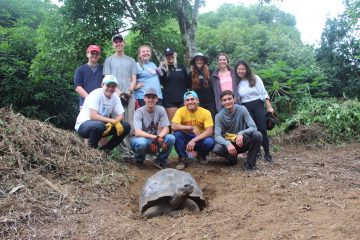 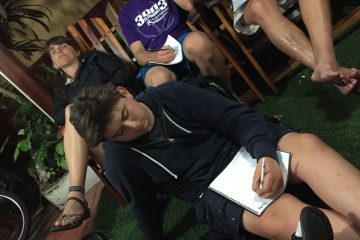 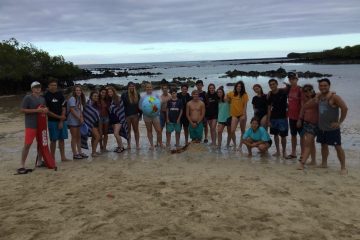 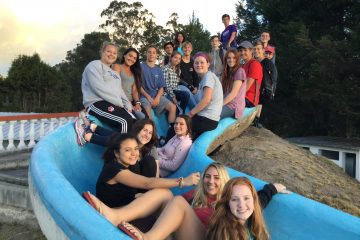 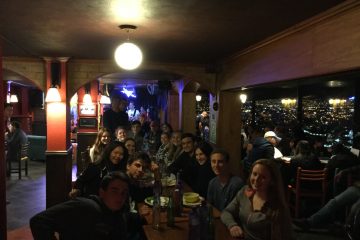