Sydney Sadler Reflects On His Trip To France

It was hard saying goodbye at the airport, when we all went our separate ways into our separate lives. Remarkable, given only two short weeks before we had sat at the exact same airport with nothing to say to each other, given we were thrown into a group of total strangers. It was our experiences during the trip – which sometimes tested our persistence or created spontaneous moments of hilarity – that brought us together. 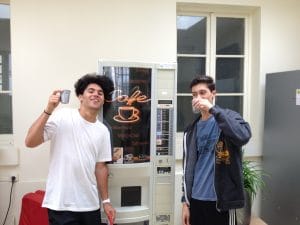 The trip began with our arrival in Versailles in a quaint boutique hotel where we got to know our leaders, each other, and the goal of our trip. Fueled by coffee from the hotel’s coffee machine (which was the best I’d ever had; see the picture of me enjoying it; I’m on the right.) I slowly adjusted to the nine-hour time difference and the increased amount of French speaking. A few ice-breakers later, we toured the vast gardens of Versailles and the unbelievable decadence of the Palace. The next two days were filled with meeting with local scouts our age and helping care for children on a particularly sweltering afternoon.

One seven-hour train ride later, we were in Carcassonne, waiting to meet our host families who we’d be living with for the next nine days. I was full of doubt: Would my French be good enough for the homestay? Would I understand them? Would they understand me? As it turned out, the homestay became one of the best experiences of the trip. My family was very caring and considerate of the challenges of an immersion environment. They knew to speak slowly and clearly so that I could understand, and they helped me if I had trouble finding the right word. My family made an effort to make the stay exiting and comfortable with many sight-seeing trips to the town and a me 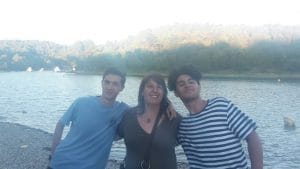 morable soccer match between France and Portugal. As an archivist, my homestay mother enjoyed history, so our walks in the city were accompanied by historical anecdotes and facts. (Here’s a picture of us; I’m on the left.) Her son was my age and had many of the same interests as me. Through the homestay, I was able to practice French with real French people, further my comprehension and learn language skills that cannot be learned in a classroom. I was also able to understand many of the cultural differences between France and the United States, such as the heightened importance of food and the everyday friendliness that people in the South of France possess.

While we stayed at the homestay, we were also working at a volunteer site in Cabrespine. This small town, in ancient times, relied on a complex system of small canals fed from the nearby river for irrigation. A massive flood in 1999 destroyed many of the walls feeding the canals, and over the years it had become overgrown. With modern plumbing, the canals were no longer a necessity, but the residents consider the canals part of their heritage. Our job was to remove all the plants and soil along a section of the wall. It took around a week to complete the project, and it was certainly gratifying to have completed the work. I was reminded that this trip was not just for our enjoyment, but its goal was also to help the local community restore their heritage site and preserve their history. 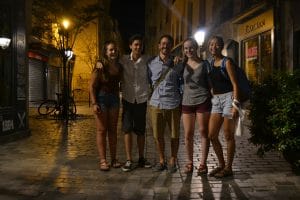 The last two days in Paris went too quickly as I wish I had more time to explore the beautiful city with all the wonderful people in our group. (Here’s a picture of part of our group; I’m the second from the left.) Our worst moments brought us together and our best moments solidified our bond, and I will certainly miss all of them. I will also miss France itself, with the people’s sense of humor, their language, and warm hospitality. This trip with Global Works not only exposed me to the language, but also to the culture and kindness of France.