March 30- April 1, 2019
I have never been so far from home before. The hours and hours of traveling was draining, yet fulfilling, at the same time. The buzz of going to a place so immersed in culture was undeniable. The minute we stepped out of the airport, I was in awe of everything I was seeing. My surroundings were so different than what I was used to. I had a lot going through my mind. Our first quest was the Royal Palace. The pictures captured on cameras couldn’t compare to the real thing. We then walked through the streets towards our next destination. On our walk, we passed some kids playing soccer and a couple of people from our group joined in. I think that it was a memory everyone on this trip will never forget. Our final destination was a beautifully crafted boat that sailed on the river. When the sun went down and the city lights came on, the sight was unforgettable. I found myself staring out into the water and falling deep into my thoughts. Today was the greatest first day!
By Alexis A.

April 2, 2019
After waking up and having breakfast at the hotel, the first thing we did was go to the Tuol Sleng Prison. The prison was originally a high school, but then turned into a prison during the Pol Pot regime. This was a really meaningful experience for everyone who went through it. After going through the prison, we had the opportunity to meet the only two survivors still alive from the prison, which was a touching experience for all who met him. After debriefing from the prisoner, we went to the National Museum of Cambodia. The National Museum was really interesting because the sophomores just finished a unit on Hindu art. We got to see sculptures of Vishnu, Brahma, and Shiva knowing about the symbolism behind each aspect of the art. All of the nature in the museum was really pretty too. We got to feed fish and take a nice break. Even though it was as hot as yesterday, we all felt better and more energetic. We walked to lunch after and it was good as usual. Then we went to the Killing Fields. It was a really difficult experience and very surreal. Hearing stories of terrible events was something that made no sense to me. I was really shocked because that’s something I could not believe humans could do. Being there was really stressful but after we got back, the writing we did about our experiences helped me understand what I was feeling. Collectively doing it was also important because I knew that everyone else was also upset and angry about it. Dinner was Italian so it was obviously delicious and we all had a great time!
– Lydia T. & Natalie A.

Today we said goodbye to Phnom Penh and embarked on a long (6ish hr.) bus ride. The first stop was Skuon Village to taste an assortment of dried fruit, insects, spiders, and chips. Many brave people tried the spiders, silk worms and crickets. (The silk worms tasted like mushy corn.) Some parents put live spiders on their children’s heads. Lots of kids held the spiders near us to give us a close look at them. It was hard to turn down the beggars and many kids and adults with children. We left the market and after a slight delay due to the A/C not working, we stopped for lunch. Lunch included free range chicken, an earthy chicken soup, rice, and fresh veggies. For dessert freshly picked dragon fruit. The rural landscape was a shift from city life. Often there was plastic on the ground and houses were on stilts. Most of the houses had tiny houses in front of them to welcome the good spirits of the new year. Many buildings in the city also had these small spirit houses. We arrived at Sambor Prei Kuk, and we went to see pre-Angkorian temples that were influenced from Hindu religion. Our tour guide, Teng, showed us around. I was amazed that some of these temples were built as early as the 7th century. I thought that from the outside, the stature of the building wasn’t that tall, but from the inside where the gods were worshiped, it looked much taller. Teng passed the time on the tour cracking a few cheesy Dad jokes. I thought he was funny. Then we had a 2 hr. drive to the hotel. Sadly we had to say goodbye to Someth our tour guide in Phenom Penh. We walked through a pedestrian street full of lights and vendors and ate an amazing dinner. We are excited to be in the wonderful city of Siem Reap.
– Brooke C. & Zoe G.

April 4, 2019
We woke this morning in complete darkness and piled onto the bus. Though we were tired, we were also excited to reach the beautiful Angkor Wat. When we arrived, the temple was shrouded in darkness, but as the sun rose, it became clearer and clearer until its full majesty was revealed. After several hours of exploring the wonder, we all begrudgingly started to head back to the bus, which would take us to see more breathtaking sights in time, the next of which was the mesmerizing Angkor Thom. There are no words to describe the limitless beauty held within the walls of the ruins, whether it be the picturesque exterior or the atmospheric interior, there was no limit to the beauty possessed by the wondrous ruins. After the mesmerizing experience with the temples, we stopped for a much needed lunch break. Needless to say, like all the meals we’ve had so far, lunch was delicious, with possibly the best spring rolls I have ever eaten. After the exquisite lunch, we packed onto the bus and split off into separate groups. Some of us chose to get a massage, but we decided to skip that and go straight for shopping. While we were out, we came across the fish massages, which some of us thought were great, while others opposed that opinion. After we returned from our journey around town, we had a lot of free time, which we spent bonding with friends over cards. Then, we had a wonderful dinner which we spent trading stories and laughs. Afterwards, many of our group decided to visit the night market, but we decided to head back to the hotel and prepare for our next full day.
– Jack M. & Julien O.

Today was a great way to follow up on the amazing day we had yesterday. Climbing up 5 million stairs in 6000 degree Fahrenheit weather was tough, but worth it in the end. We got to see a HUGE Buddha laying down. It’s amazing to think that it was carved so long ago, but again, everything we’ve seen on this trip has seemed like that. What was even more amazing was the view from that height. It looked straight out of a TV show or Movie. All I could see were trees, on trees, on trees. It was like nothing I have ever seen before. It was simply breath taking. Then we made the journey over to the waterfall. I took my camera out to capture the moment forever, but as I looked through the lens with my finger on the button, I slowly looked up and put my camera away. I figured it was better to just keep that one for myself. Though the ride down was a little rough, we made it down okay. We saw more temple ruins which were inspiring and eye catching, then drove back to Siem Reap to have dinner and end the night early from a long exhausting day.
-Jared B.

April 6, 2019
Today was very cool. We started off the day learning about how the statues were made. After that we picked out some gifts for our families in the gift shop! After that we drove to our cooking class where we made lunch for ourselves. We cooked a mango and shrimp salad. Chicken soup (hot and sour), and lok lak! It was very satisfying to eat our food after a lot of sweat and tears were put into it. Emphasis on sweat! When we finished eating, we drove to the river. We took a boat tour around the floating village and it was very cool to see all the houses on the river and how people live. We stopped to look at some crocodiles and then we went back to hotel. Currently we are eating dinner and we are about to go to the night markets again. I’m very excited! 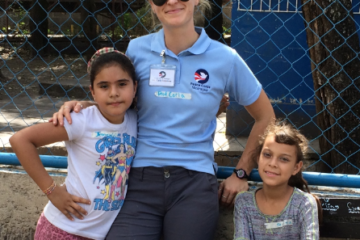