March 22-23, 2018
Last night we arrived in Nicaragua at 9:00pm. We had an hour-long bus ride from the airport to La Abuela, Laguna de Apoyo, which was our first hotel of the trip. We woke up to howling monkeys & screeching parrots. Next, we had a breakfast of pancakes, toast, & gallo pinto (rice and beans). We had our first orientation & then went swimming in the lake for almost 2 hours. For lunch we had a grilled chicken, beef, and a vegetarian option. After that, we promptly packed up and went on a bus ride to Managua, where we met community members from Podcast for Peace. We learned about what they were doing and how we would help. Many members of the class bought handmade jewelry, made by the kids who we would be helping. Finally, we went to Hotel Xolotlan, Managua, where we had chicken fajitas, rice, & garlic bread for dinner. We had a logistical meeting and then went to bed at 9:30pm. We had a great first full day in Nicaragua and are happy to be here!
We are looking forward to tomorrow, when we will have our first day of service work! 😀
Today’s Writers: Claudia, Lucas K, Mihir, Nick, Riley
March 24, 2018
Today we woke up at 7:15, and had breakfast at 7:45. We then traveled by bus to PodcastsforPeace, which we toured the day before. First, we split into two groups: one going on a tour, and one to stay and begin working. In the tour, we took a bus around the main city dump. We were shocked by the vast hills of trash that locals used to live off of. We learned that children, as young as 8 years old, have worked in the dump to earn money for their families. The woman who led the tour lived during the civil war and the national embargo, which inspired her to start working on community development and supporting new generations.

Back at PodcastsforPeace, we split into four groups: mixing cement, sanding chairs, painting chairs, chipping the wall to prepare for a new layer of concrete. We did this until it was time for lunch (the groups switched so that all of us could experience the tour). For lunch, we went to a vegetarian restaurant where we enjoyed a buffet and tasty smoothies. After lunch, we went back to PodcastsforPeace and continued our work. At 4:30pm, we had finished our work for the day and, as a reward, got to go the ice cream shop. At this point, we were both exhausted and dirty, so as soon as we arrived back at the hotel, we jumped in the shower and came back downstairs for dinner; a choice of either beef and mashed potatoes, or pesto pasta (with a side choice of salad). Finally, after dinner, we participated in an activity that made us think critically about privilege and how it has affected our lives so far, and our future.

Today was our last day at Podcasts for Peace. After two days of mixing cement, scoring walls, painting chairs, and applying cement, we finished our time there. We later hopped on a four-hour bus ride to La Garnacha. La Garnacha is a rural farming cooperative located in the mountains. When we arrived the different pace of life compared to Managua surprised us. Once we were settled, we went on a beautiful sunset walk. The view overlooked a valley filled with natural beauty.

At dinner we met Reynaldo, the owner of the land we would be working, and his family. They welcomed us to where we were staying and what we would do. For dinner we ate gallo pinto with eggs. Later, lots of us enjoyed heated card games such as Blackjack and Mafia. Our time at Podcasts for Peace taught us to be appreciative of what we have, but it also showed us that material stuff does not bring us happiness. The families we met in Managua were some of the happiest people we had ever met, though they did not have all the amenities we are accustomed to. We hope you all are well.

Today we woke up and had gallo pinto and a tortilla with homemade lemonade for breakfast. Then we hiked about a mile and a half, which was around 30 minutes to the farm. The terrain on the hike was rocky and pretty challenging and it was a good workout. Along the way we got to know more about each other such as what foods we like and we hobbies enjoy. Once we reached our destination, we saw a beautiful field of different vegetables. After admiring the view, Reynaldo gave us an explanation of what we would be doing for today and tomorrow. Reynaldo told us we would be digging holes for the base of the greenhouse, removing any weeds from the vegetable field, and carrying wood.

Once we were done with all the hard work we split up into two teams and did an activity in the town. One team met the local stone/wood carver and he taught us how to carve a stone into a cool sculpture. We all chose one design and he started it for us and then we fixed it up into the final product. From this process of making our sculptures we learned a new skill and we got to be more creative. When we switched activities we met a man named Pablo. He was the owner of La Programa farm . We had the opportunity to hold and meet baby goats and learn about worm composting and we loved it! We’re excited for tomorrow.

Today was an eventful day as it was our last day of service for the entire trip. For breakfast we had gallo pinto and potatoes. Afterwards, we walked down the rocky path to the service site. (Instead of walking, some of us slowly fell). Once we got there we divided up into groups. Today, the girls were digging holes and the boys were weeding, and a couple others were shelling seeds. After a couple hours later, noon rolled around and we stopped for lunch and a really cold swim. Lunch was brought down to us via horse, and we were all extremely thankful that we didn’t have to immediately hike back up. We stayed at the pond for at least 2 hours, taking turns jumping into the water. The water was so cold that even the people who normally swim were freezing.

When our time was up we got dressed and started the long hike back up, taking approximately 15 breaks anytime there was shade. Once the long, strenuous walk was over, we had 2 hours for free time. We were allowed to shower, shop in the community or rest and talk. Showering felt amazing, although the water was tremendously cold. A group of people started to play soccer with the local community. (Those who played got creamed). After the 2 hours of free time was up, the 8th grade separated into two groups. One group continued to play soccer and the other went on a mini-hike to watch the sunset. The sunset was amazing and we slowly trudged back, excited to eat dinner and sleep.

Currently, we are eating dinner, which is a noodle soup with squash, broccoli and carrots. The room is filled with chatter and laughter. After dinner we will have a reflective activity, which is followed by some time to get ready for bed.

Tomorrow we will drive 4 hours to Granada, which we are all excited about.

Today was mainly a travel day but we did have a lot of fun too. In the morning, we packed, stretched, and played soccer with a couple of the local kids. After we said our goodbyes to everyone at La Garnacha, we went on a four hour bus ride to Granada. On the way to Granada, we sang songs, and played cards with friends.

When we got to Granada, we went out to dinner, and ate pizza, which was really refreshing, because we had been eating beans for the past three days. After getting pizza, we went back to our hotel and got settled in our new rooms. We then went out to get ice cream at a small shop in the plaza/downtown. By the time we got back, we were exhausted, and went right to sleep. Overall, today was a great day!

Today is Thursday, March 29th. We are going on a boat tour to explore the 9th biggest lake in the world. We also found out about this lake that there are many sharks and many modern houses are built on the islands surrounding the lake. Later, we went to lunch in a cute restaurant, Café de los Sueños, where this time the drinks were cold! After we went to an active volcano, Volcan Masaya, where we could see the inside. Sadly, we could not see the magma or lava because it was covered with smoke.

The highlight of our day was going to the market and learning how to bargain. The market was in a castle-looking building. Many people raised their prices to 1,000 Cordobas for a little sign, but the students learned how to bargain with cutting the price in half or convincing them to lower the price on the same object. Some things that the students bought were blankets, clothing, sunglasses, or souvenirs/presents for their friends and family.

The final part of our amazing day was going swimming in a small pool in a beautiful hotel that we were staying at in Granada. Everyone was soaked with warm water and dunking heads. The pool was relaxing on a hot day.

Since Thursday is Emily’s birthday, we decided to go to a nice, little restaurant with a cute gift shop. We had amazing pasta, chicken, and gallo pinto. At the end, we brought Emily a slice of raspberry cheesecake and sand her happy birthday! For the rest of the night we were shopping and eating delicious food. Finally, we got back to the hotel around 8pm.

Before we went to bed we had a closing reflection activity of our whole trip in Nicaragua. We talked about how we felt our bonds got stronger with our classmates and how our teachers were always there to support us. We did another activity building up our community and our bonds with our classmates making them even stronger. In the end this all summed up to a great and successful trip in Nicaragua and we wish we can do this again in our lives!! Thank you for reading our blog and following along with us the whole trip! 🙂 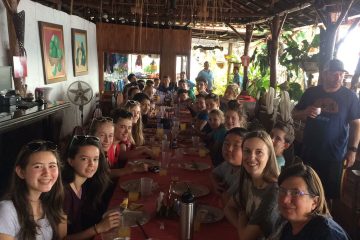 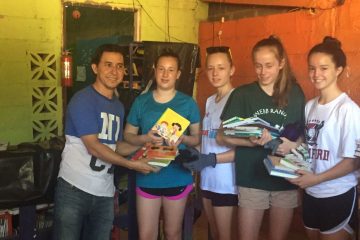 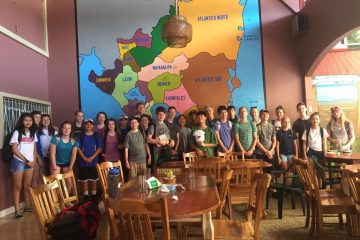 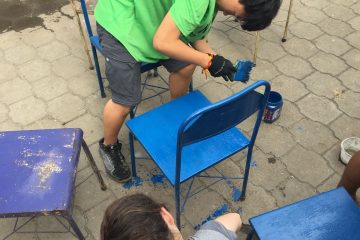 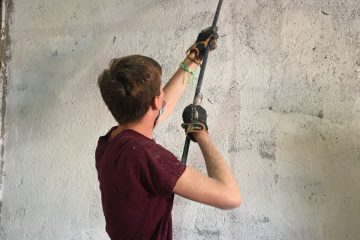 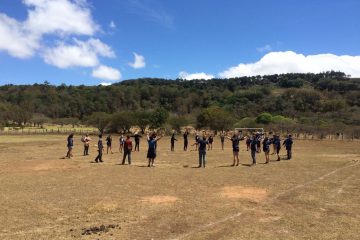 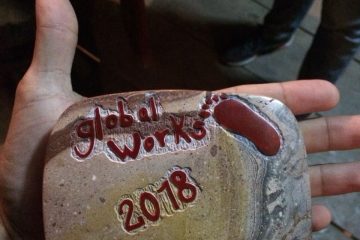 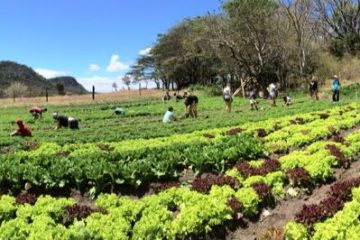 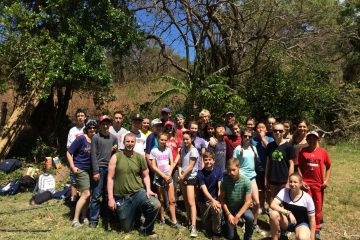 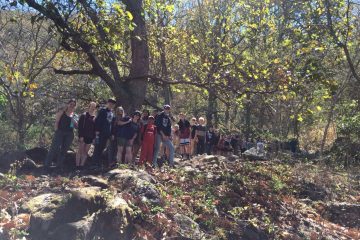 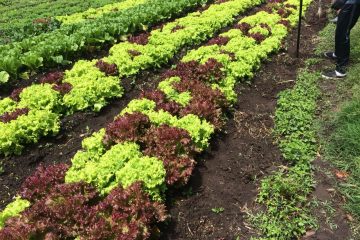 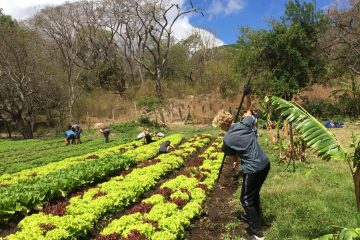 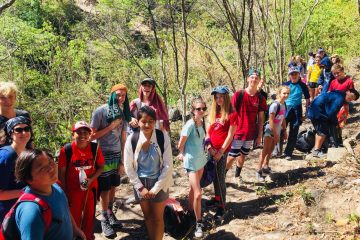 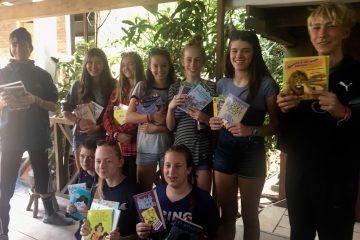 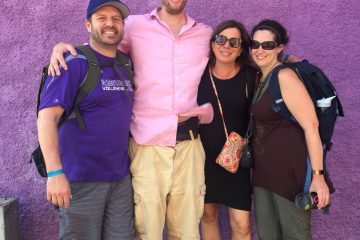 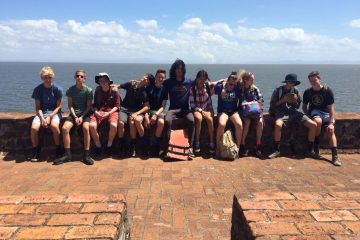 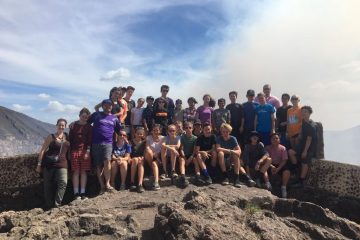 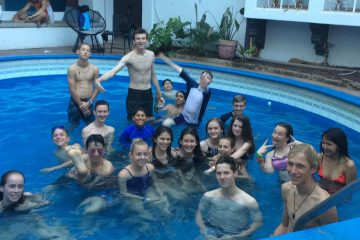