Our first day together in Panama was spent touring around Panama City, taking in the sun, and enjoying local delicacies. We arrived in the afternoon and went directly to the hostel, getting settled before heading out in the sun toward old town, Casco Viejo. We passed many lively people selling food, artesanías, and preparing for carnavales next week. After meeting with Gilberto, our tour guide, we took in the history of Panama and stopped for a delicious meal in the middle of town. We then made it back to our hostel where we settled in for a well deserved night of sleep.

February 20, 2017
Today we woke up early to a solid breakfast before putting on our dancing shoes. Our dance teacher, Fiona, came by to teach us the basics of salsa, bachata, and merengue. Some of us caught on faster than others but we can all say we’ve got the rhythm down! We then packed up the bus and headed across the country to the central highlands of Santa Fe, stopping at an Argentinian restaurant en route. We arrived late to Santa Fe, heading straight to a friendly local restaurant where we got a taste of local cuisine, fried chicken, pork, patacones (fried plantains) and yuca. A short walk home under the stars brought us back to our hotel where we debriefed the last day (though it’s felt like several days already), and headed to bed. Tomorrow it’s off to our first day of service!

February 21, 2017
Today, after eating a nice breakfast, we got on a bus and took a 30 minute ride down to El Carmen to start our service project. We uprooted trees and cleared out the grass in the area where we started to make a soccer field. From here, we also began to dig out a border we’ll be building a cement wall to establish the space for the field. After approx three hours, which flew by, we headed back to Santa Fe for lunch a began planning for the game night we had after dinner. We then took a tour of Santa Fe and said hi to numerous people along the way. We saw beautiful sights and kept walking until we reached Sobeida and Yayos organic farm, which was full of oranges, and had many fruits and vegetables most of us had never seen before. Sobeida and Yayo explained the benefits of organic farming, despite then work, and even showed us their 2 pigs and 300+ chickens. Eventually, after Sobeida and Yayo offered us organic homemade juice and bread, we had to say goodbye and walk back to the hotel to get what we prepared for game night before going to dinner. Game night had a fun turnout – we raced, colored, played card games, and even played pictionary with playdoh. With such an eventful day, some of us were so excited to the point we wanted to do more, but we will have to wait until tomorrow.

Our day started at 8am with homemade pancakes and eggs. By 8:45 we were on our way to El Carmen to continue our service project to prepare to lay the cement wall for the soccer field. After working in the hot sun we were thanked by the locals with freshly picked oranges. By 11:30 we were on our way back to hotel Santa Fe to freshen up before lunch. We then had some down time to read and play card games or even just to lay out in hammocks before we continued our day with a hike up to La Golondrina waterfall. We were driven through the mountains where we got some of the most breathtaking views of panama. Once we reached our trail we immediately began to climb our way towards the falls. After about 40 minutes of navigating our way through the trees we finally made it to one of the most beautiful falls Panama had to offer. We took some time to relax, take in the sights and dip our feet in the cool waters. Shortly after, we started to head back to the bus to get ready for dinner at Cafe Dorado. after dinner we were given a lesson on how to make ojaldre, a fried bread, with a Santa Fe local, Avis. By around 9:45 we were on our way back to the hotel, stomachs full on the ojaldre we helped make.

After a restful night, we started our day off with a delicious breakfast of tortillas and an omelette. Filled with energy to tackle the last day of work, we were driven to El Carmen. Once there, we split up into two groups: one to clean up the ground in preparation for cement and the other to continue digging up the dirt from the borders. The next step was to relocate the bricks to an accessible point and prepare ourselves for the difficult task of mixing cement. We took turns mixing the rocks, concrete and water with a shovel and then filled the borders to lay down the bricks. Before leaving we were recognized for our work and dedication to the project. Once back at Hotel Santa Fe, we ate fries and chicken and then headed to a local market. Soon, we found ourselves taking part in a friendly soccer match with a few locals and then had some ice cream. At 5pm we freshened up and relaxed before our farewell dinner at El Rancho. Once there, we interacted with locals, ate rice with fried chicken and danced with all of our friends. Just like the previous nights, we walked back to the hotel while admiring the star-filled sky for one last time. 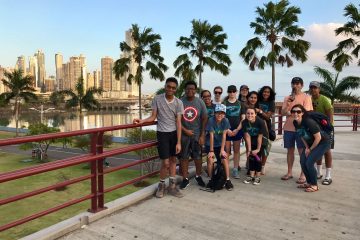 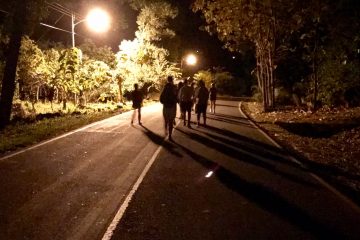 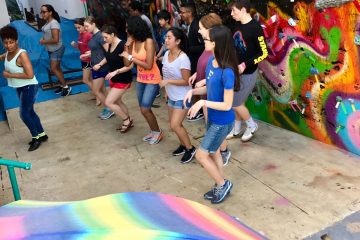 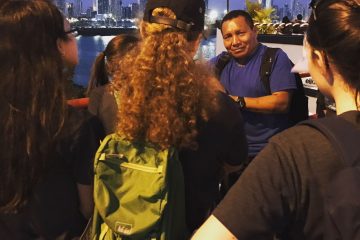 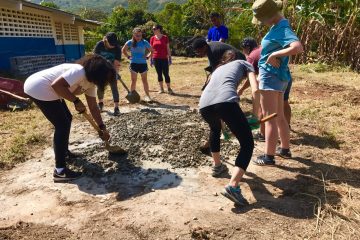 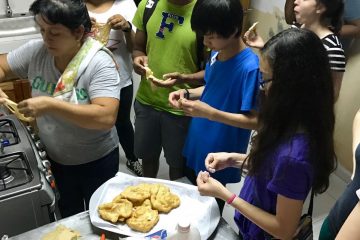 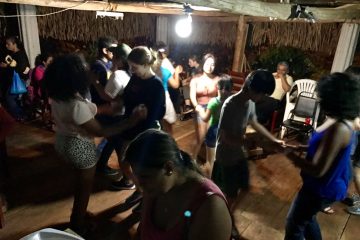 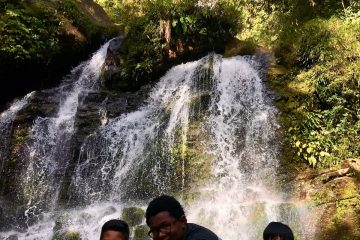 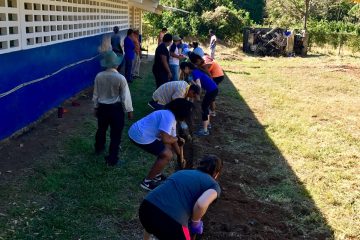 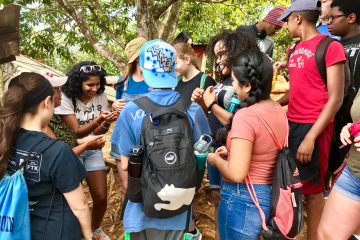 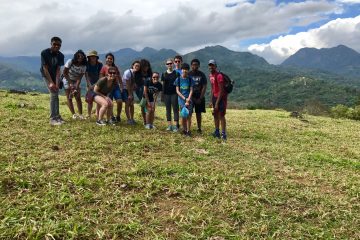 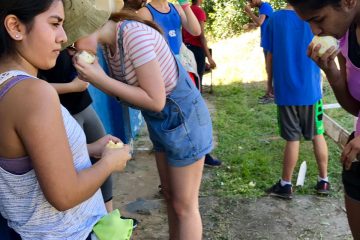 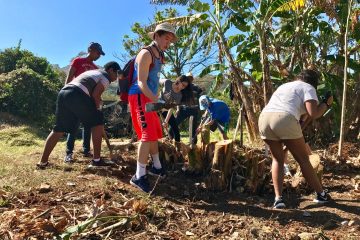 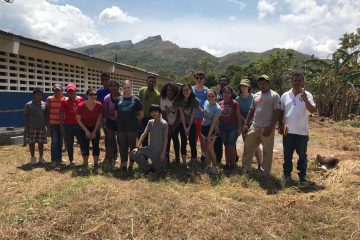