Today was a day filled with hard work, laughter, and new beginnings. We woke up and played some frisbee at the “big yellow house”, then headed to a small community named Villa Del Rio. There, we got to work on the foundation for some new houses. We use sand, rocks, cement mix, and water to make concrete.  It was a hard (and really messy!) process, but we had a lot of help and guidance from community members such as Jonathan. After working through the morning, we had a delicious lunch prepared by Jonathan’s parents (also community members). It was great! After that, we split into groups and worked on different houses in the neighborhood.  We met some really nice families and had a lot of fun working with them.

Then we return to the “big yellow house” for dinner. Hamburgers and hotdogs were served! We had fun playing games and chilling out together. That was followed by a nice walk and reflection on the beach.

Written by: Trinity and Mirielle

Our second day of service was a blast! The food in the community is a constant highlight and somehow has only gotten better! The first project wrapped up early in the morning of the second day and we had time to play games with the kids in the community. We dove into our next project after lunch then returned to the big yellow house to change and go play an invigorating game of ultimate frisbee on the beach. We had a delicious dinner and reflected on our trip so far before getting some much needed rest.

The third day started off early! A nutritious breakfast gave us the energy we needed to begin our third and largest project so far. Today we were joined by a group of students from Long Island. We showed them the ropes of mixing cement and quickly had a 60 person team working together for the benefit of the local community. After another amazing lunch, we took off for a zip-line adventure! “Toro verde” zip-line park features some of the best canopy tours in he world and the view did not disappoint! We said goodbye to our mountain top vista and returned to the big yellow house for dinner and salsa dancing lessons.

Today we got an early start and packed up all our stuff to move to the next lodging, the Moonlight Bay Hostel. After eating breakfast and loading everything into the van, we went to the workplace. Today we worked on mixing and transporting cement up to the roof of a house. We used the cement to smooth out a cement roof for the house. We mixed the cement and then used buckets to hand the cement up to the roof. After working hard (with some dancing in between), we again went to lunch for some homemade food. We played ultimate frisbee for a couple hours with some of the community members, and then packed up our stuff and headed to the Moonlight Bay Hostel. We then headed to the bioluminescent bay where we saw sparkles in the water – small, asexual, micro organisms. We ate at a small nearby restaurant and were able to look around at a few small stands selling souvenirs and smoothies. Now we’re off to some well needed rest! 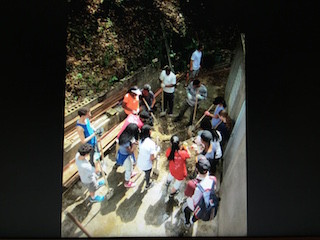 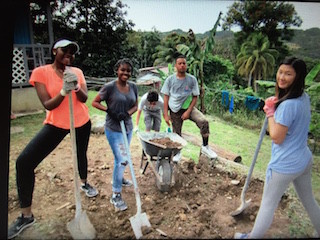 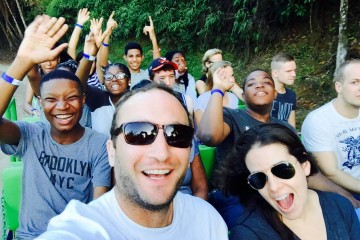