Catherine Reflects on her Trip to Cuba!

I can honestly say that my trip to Cuba with Global Works was life-changing. It had been my dream to go to Cuba since I was little because my grandfather is Cuban. The idea didn’t become a real possibility for me until 2014 when Americans were allowed to visit Cuba once again. I am also deeply curious about food and culture, so Global Works’ activities of a cooking class, urban gardening projects, and shopping at a Cuban market attracted me to this particular Cuba trip. 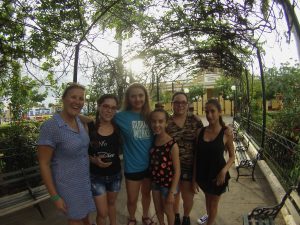 Our first day did not actually begin in Cuba. It began in Miami International Airport. We all arrived at different times and stayed the first night in the airport hotel with our new group members. Our last night of American amenities in the Cuban-influenced American city was a perfect pause to get to know each other before the beginning of our trip. We boarded our flight to Cuba at seven o’clock in the morning and watched the stunning island emerge from the sea over the course of our hour-long flight. After waiting for and finally getting our luggage, we boarded the tour bus that we would remain with throughout the trip. We met our tour guide Marlon and went off to our first activity in Havana: a cooking class! We learned how to make virgin mojitos and ropa vieja (not old clothes, but slow cooked pulled beef). After our much-needed lunch, we went to our casa particular, which is essentially someone’s house that they have been authorized to use as a bed & breakfast. We explored a little more of Havana and the Malecón, and fell into our beds in our lovely air-conditioned rooms. The next few days in Havana were filled with adventures, as we saw live dance and music, ate amazing food, and even went to work at an amazing urban garden called Alamar, which was run by a woman named Isis who is considered the Alice Waters of Cuba. After our service in the garden, we went to the most beautiful beach I have ever been to and spent the day in the temperate ocean and laying in the sun. We ate dinner at the home of an artist named Fustor, who completely covered his compound in mosaics of symbols of Cuba. In those first few days in Havana, we also visited a masonry school that restores the glory of pre-revolution Cuban architecture in sustainable ways. We were also given a challenge to buy specific Cuban ingredients in the market with Cuban Convertible Pesos also known as CUC (pronounced like kooky, which would also be a good description of the complicated dual currency system in Cuba).

After Havana, we went to Las Terrazas, a formerly deforested mountain range that has been completely reforested using the terrace system and turned into what Americans would consider a national park. We hiked through Las Terrazas and saw rare birds and flowers, an old coffee plantation and coffee mill, and ate a delicious lunch. We ended the day in our next destination: Viñales, a small valley town southwest of Havana. In Viñales, we made pottery and helped out in the garden of a self-sufficient community art center for children in a poor area near Viñales. After Viñales, we travelled to Bay of Pigs (Bahía de los Cochinos) on the south coast, where we went snorkeling and learned about the Cuban-American battle at the Bay. We then travelled back North to the historic city of Trinidad, which is a UNESCO world heritage site. We met Cuban artists and printmakers, took bici-taxis to our casa particular, toured the beautiful city, and even met local Cuban girls. We danced quite a bit in Trinidad. We took a salsa class (videos of which will never see the light of day) and danced in El Rincón, a corner of music and wild dancing in the town square. We also made our way to a forest outside of Trinidad, where we hiked, swam through a waterfall, and then ziplined over the mountains. We ended the trip in Havana, where we ate more amazing Cuban food and watched a lively dance performance. Our final casa particular was an old mansion, and we all sat on the porch of the old house and talked about how amazing our trip was.

The group of five boys and five girls and Tyrone, the chaperone, were truly what made this trip amazing. I have never been able to get to know a group of people so deeply in so little time, but as we all experienced the culture shock of Cuba, we learned about ourselves and each other. Global Works truly made the experience unique, as it let us learn about a place many of us knew very little about while also giving us the opportunity to experience truly fun moments like ziplining and snorkeling. We were able to make our trip truly unique, and any future travelers will have their own specific, but still amazing trip to Cuba with Global Works.