Today we started our journey in Ecuador to some beautiful hot springs outside of Quito. Boarding the bus we traveled up the winding roads through the mountains, looking out the window we saw the hilly mountains, lush trees, puffy clouds, and cool wild animals. Then we arrived at the man made pools with volcanic pumped water. We jumped from different pools and experienced the new culture. Then we had some traditional Ecuadorean snacks. They were mostly nuts, dried beans, fruit, and some chips,they were so delicious! We then traveled back down the mountains to our hotel and relaxed before dinner. We finished the day with a delicious meal and then went to bed to prepare for the next day, to the Galapagos!!
– Kyra T. & Haley C.

July 18, 2016
Today we started our journey to the Galapagos with some good long hours of travel. After we left our nice hotel in Quito, we headed for our morning plane ride to Galapagos. We then walked out of our plane to meet our Ecuadorian tour guides for the island, Pablo and Sandra. The short bus and boat rides set us up for the longer ones that came next. The long bus ride was about two hours on a long straight road with giant tortoises on the roadside. For the boat trip we were all prepared with Dramamine for the big waves to come. Luckily no one got sea sick and we even saw sea lions and penguins on the shore. Overall our travel day went smoothly and everything was A-ok and we’re ready for the amazing adventures to come!

July 19, 2016
It’s day three (and we are) in Isabella and it’s been spectacular. To start the day off Dave’s alarm clock was an hour ahead and the boys grudgingly got up for breakfast. However the meal was delicious featuring eggs and pancakes. After full stomachs the group went off the pier to Isabella and snorkeled. We saw voluptuous sea lions frolicking through the ocean. We then got lunch at Sarita’s restaurant and had chicken wrapped in bacon. After a scrumptious lunch we went back to the hotels and took a nice, relaxing siesta. Then we went to the tortoise breeding center with Pablo and Sandra where we learned about the life of Galapagos tortoises and their importance to the Galapagos eco-system. We then went on a hike back the the hotel which led to volley ball. After we freshened up in the hotel rooms and then enjoyed a seafood dinner that was swordfish with a side of beans and rice. To finish the day off we had a fun hangout on the beach.

July 20, 2016
Another great day in the Galapagos. To start the day we ate grilled cheese. Yes, it was unconventional but it was tasty. Next, we explored a lava created island called Las Tintoreras. I finally got to see the blue footed boobies that I have endlessly been waiting to meet. We then snorkeled near the island. We swam with sea turtles, sea lions, and saw beautifully colored fish. Later in the day we took a scenic walk on the soft sand beach. But the climax of our day had to be the game of fútbol we all participated in. We played a competitive game on a small turf field. What was supposed to be a thirty minute game eventually ended two hours later. Surely a high point of the trip.
-Benny S.

July 21, 2016
After breakfast this morning, we took a 45 minute boat ride to Los Túneles, which is a series of beautiful lava tunnels and formations. For about a half an hour, we walked around on the lava rocks and found two families of blue footed boobies! We were fortunate enough to see four babies among these families (and two eggs)- three of them were a few weeks old, and the other was enjoying only its first or second day alive! It was fascinating to see these birds in their various stages of life and learn about their unique features. Next, we hopped back in the boat for a few minutes to go to a snorkeling spot among the black volcanic rocks. Through the crystal clear water, we saw hundreds of small fish, a seahorse, four stingrays, four sea turtles, and even two sharks (sleeping under the rocks, luckily)! For me, it was especially magical to see how graceful the sea turtles were as they munched on underwater plants surrounded by colorful fish. After snorkeling, we ate a delicious lunch on the boat and headed back to the town we are staying in, Puerto Villamil, to relax on the beach and play volleyball before dinner.

Such an adventurous and eventful day in Galapagos. To start off, all the girls woke up at 5:45 to wake up the boys with a splash. Since the boys are late every morning we thought it would a good idea to wake them up with a good prank to be downstairs ready on time…they were still late. We got to have more grilled cheese for breakfast which was a good way to get us ready for our hike. We all rushed onto the bus to get to hike up one of the largest active volcanos. Waking up so early was hard for us teens but it was worth it since we got to see a rainbow for the first half of our hike of the Sierra Negra which was a beautiful view with a bonus of good pictures for everyone. The sun started to come out so we powered through the heat and worked our way up to Volcan Chico. After that we all got a break to chill and eat our lunches of sandwiches and snacks. Six hours had gone by and we were ready to make our way back down. We were all sad to leave such beautiful views but relieved to be done with such a long hike. We drove down to Campo Duro where we camped the night. We all buddied up and picked out our tents to sleep in. After a yummy dinner we chilled in some dope Hammocks and all bonded over a campfire roasting marshmallows and each other… We hung out telling each other riddles and stories. After our campfire we all went to bed and got ready for another fun day in the Galapagos.
-Savannah N.

Today was a really productive day. We spent the whole day doing community service. The first project we did was cleaning the tortoise habitat at Campo Duro, a place where they hold young tortoises to later reintroduce them into nature to help protect the species. After that we built a raised bed to grow vegetables. There is not a lot agriculture in Isabella so a lot of food has to be imported into the island. We hope that people around the area take notice that it is possible to grow vegetables in Isabella’s unique climate and decide to do it themselves.
– Dan B. 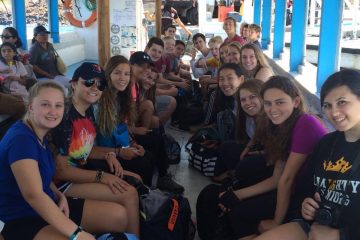 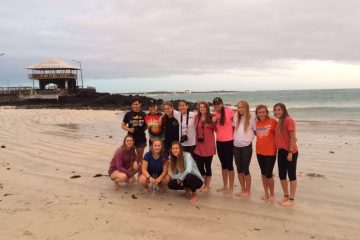 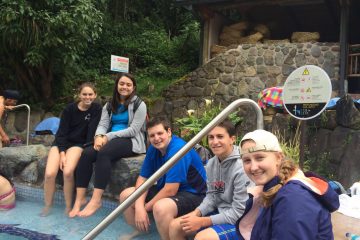 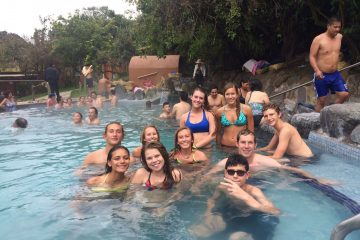 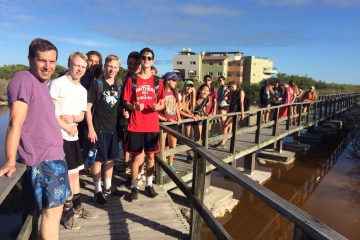 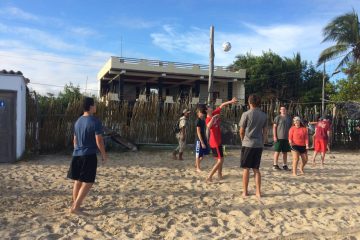 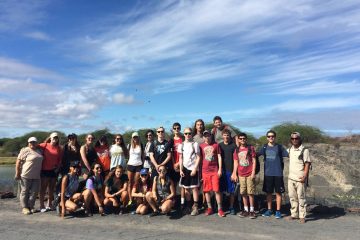 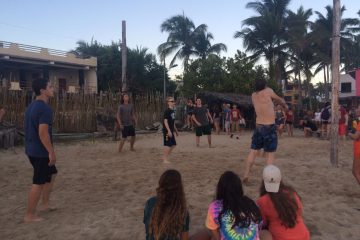 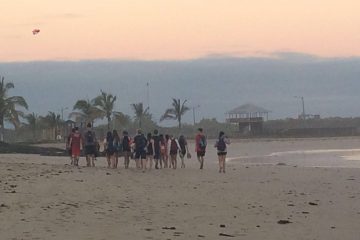 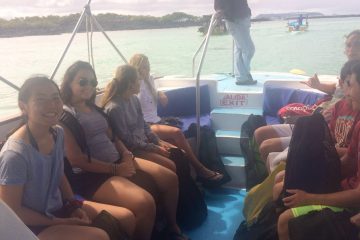 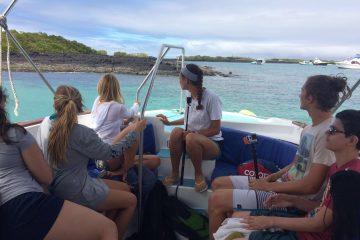 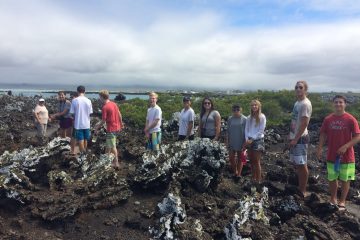 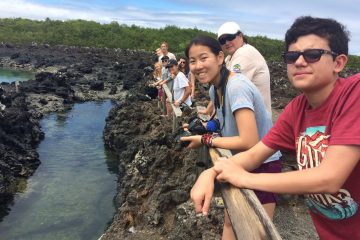 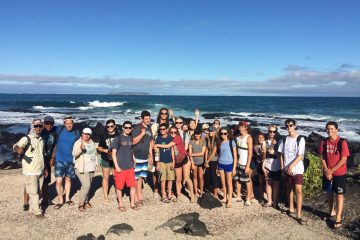 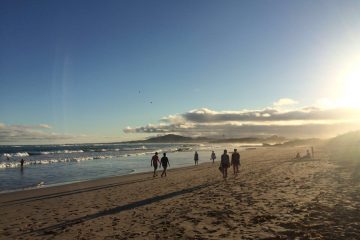 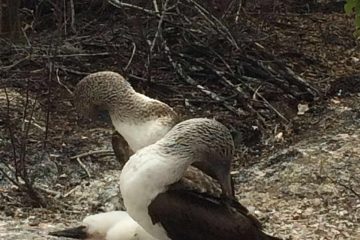 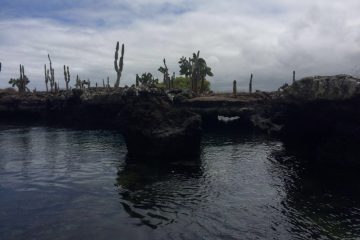 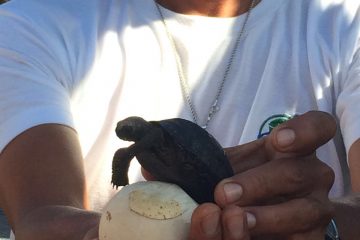 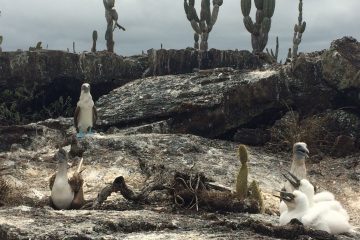 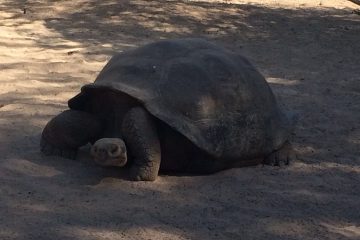 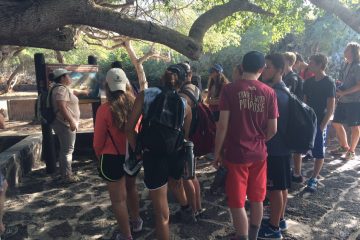 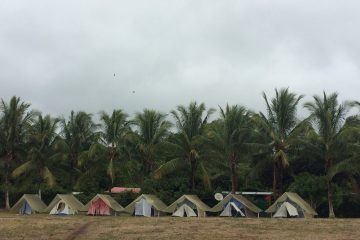 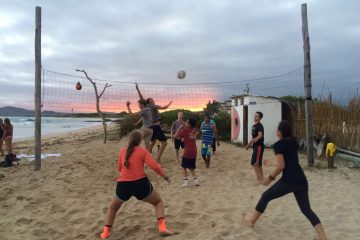 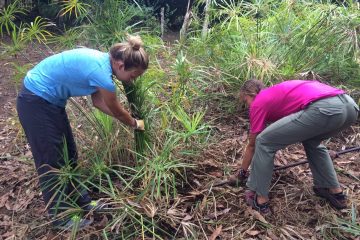 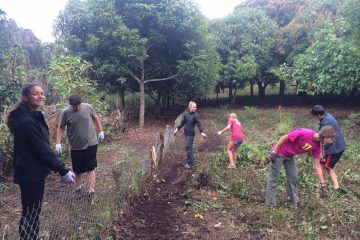 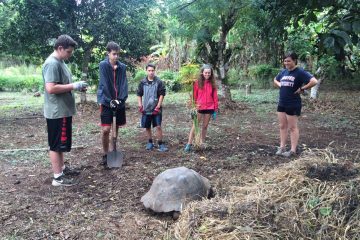 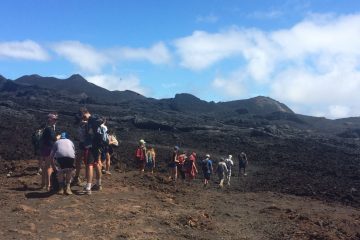 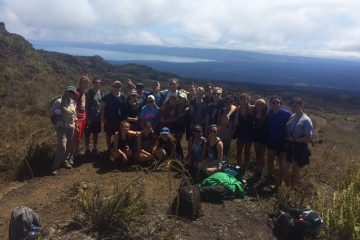 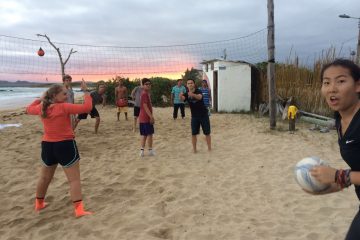