When I first arrived in the Miami International Airport I was nervous, mostly because my connecting flight was delayed. As I walked up to gate D26, I was so relieved to see the group of red Global Works shirts. When I arrived we all sat in a circle and were handed a post it note. On the note, we wrote 3 things; our name, our seat number, and what service meant to us. After finishing this activity we were informed that one of our fellow student’s flight was delayed, and our leader Michelle had to stay in Miami to wait for them. They would meet us in Nicaragua the next day. We all boarded the plane and, just as we were about to take off, the captain told us the engine light was on and the needed to fix the engine before we could leave. About an hour later, we were finally taking off. When were we landing, we could look out the window and see the lights of Managua below us. After we got out of the airport, we meet up with the people who flew in on their own. We all piled onto the bus, and took the hour drive to the Laguna we are staying at.

As we drove, everything seemed familiar but at the same time quite different. We were driving on the outskirts of a city, and it felt like it does back home, except the houses, the shops, the vegetation, were all different. In the morning we awoke to beautiful scenery – as a crater lake was surrounded Blythe lush vegetation of the jungle – and had our first encounter with gallo pinto. Gallo pinto is made of beans and rice, which is part of a typical Nicaraguan breakfast. After breakfast, we had our orientation and got to do “get to know you” activities. We all sat and talked about how we want to act, and things we want to do on this trip, to make it ideal for us. After orientation we had lunch, then we were off on a cultural tour. Our first stop was Masaya Volcano, one of the three places in the world where you can see active lava. When we arrived at the top of the volcano, we were only allowed to be up there for about 10 minutes because the volcano is releasing gasses that are dangerous if inhaled for a long time. We stood in the lip of the volcano and looked down at the lava beneath, and we were all in awe. It was truly a beautiful sight. The lava at the bottom of this huge volcano was so powerful, as the orange glow made it hard to look away. We could see the contrasting coats of the bright green parrots flying into their nest on the side of the volcano, which surprised us because of how dangerous it all seemed. After the volcano, we were off to the market. We all split off into groups of three and got to spend 30 minutes in the market to buy souvenirs and see all the amazing patterns and textiles. After the market we went to a school where they teach pottery, and we got to see a demonstration of them making a vase. After the demonstration, we explored their shop and got to see the amazing quality of the products they are making. Then we were back to the resort. After dinner we all took part in an amazing salsa class, everyone had fun and there was lots of laughs. After the class everyone was tired so it was time to go to our rooms, wash off, and get ready for another exciting day.

Beginning our morning with an option of either oatmeal or a Nicaraguan breakfast, we soon transitioned to a new bus for a tour around the city of Matagalpa. A woman named Nohelia guided us around a few historical monuments and parks. We first went to a beautiful white Matagalpan cathedral, and observed a statue of Jesus on the cross that was green to signify hope for the Nica people. Then, we moved to a park, where we had a chance to mingle with locals going through their day working, some were shining shoes, selling goods such as ice cream, and just relaxing. A group of college students we encountered was excited to practice their English with us and stopped to try to have a conversation. We then traveled higher into the mountains and visited a graveyard. There were two different sections of the graveyard: one was for the Nica people and the other was for foreigners who did not follow the national religion (Catholic). At the graveyards, Jason sat on a grave to rest and now is cursed by  a vengeful spirit. The final step to our journey around the beautiful city was a lookout point, with a tower. Upon climbing up the stairs, we were hit with gusts of wind, as well as a birds-eye view of the sprawling city. We located the places we had visited this morning, as well as our journey through the streets. Arriving back at the hostel, we ate a lunch of either quesadillas or beef steak. After lunch, we met an expert in alternative eastern medicine, who showed us the techniques of chiropractice, of shiatsu, and of acupuncture. Isabelle volunteered first, getting two needles in her leg, as well as one in the top of her head (the conception or point of a hundred illnesses). Georgia also volunteered, experiencing a basic shiatsu massage. Osamah then decided to have a chiropractice session, and discovered that his back could make sounds he had never heard before.

Maria’s irisology experience: The exam felt like an existential experience…  he knew things that I don’t get how he could tell. I felt dumbfounded after. Monk’s irisology experience: The chiropractor asked me to stare at his forehead while he searched for black spots caused by trauma in my eyes. He found signs showing that I had a bad run in with some spicy food which was also accurate. I’m not a big believe in Eastern medicine but this experience definitely warmed me up to the idea of it.

We then participated in a scavenger hunt in a local park, and Steven, Emma, Kelly, and Joyce won, being the group with the most accurate answers. We ended the day with dinner at an Italian restaurant. 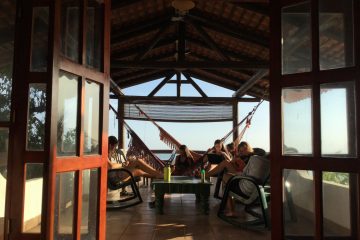 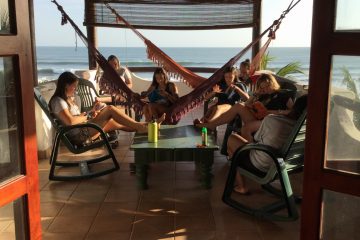