The first group got in a little early and we were able to unpack and relax at the beach. After the beach we relaxed at the house and played cards and got to know each other more. There was also a special game with Oreos and everyone had a laugh. The next group then came in with a big welcome and we had dinner. And at night we all played in the field and got into our small groups together. Travel days are usually boring but this day was amazing and we can’t wait for what’s to come.
By Matthew and Michael

July 8, 2019
This is what happened on the first full day of our Global Work trip in Puerto Rico! At the early hour of 6:30 some dedicated runners heard a knock on their door and they joined their leader Eric for a run on the beach. The rest of the travelers were woken at 7 to get ready for a delicious  breakfast of French toast sticks, eggs, and fruit. By 8 we, the travelers, hopped on the bus for a ride to Old San Juan. There we met our wonderful tour guide Alvin who taught us about Juan Ponce de León and the history of Puerto Rico. We stopped in some gift shops and grabbed a  delicious, hearty meal before hopping back on the bus. Upon arriving back at the Big Yellow House we changed into swim suits in anticipation of the wonderful beach. After swimming and saying hi to a stray, nice, sweet dog, he followed us home. We walked back to the house and ate a meal of Mac and Cheese and other great food. Soon we arrived on the volleyball court where we introduced ourselves to more of our peers through icebreakers and played fun games. Finally we prepared for the first day of service through establishing community agreements and watching the informative documentary by Anthony Bourdain called Parts Unknown. We are headed to bed by 10:30 to get a good nights rest before our long day of work tomorrow!

Today we ate a delicious pancake breakfast, and together we made our way to the beautiful Vega Alta community, Villa del Rio. There, we worked with cement and met the welcoming people of Villa del Rio. Our service started with preparing topping for the floor in a previously abandoned house. This experience was enhanced by the teamwork of the Global Works students and the guidance of community leader William and his friends. Despite the language barrier between the students and William, some helpful translation from Ana, and other forms of communication allowed for a sense of camaraderie to develop. In fact, in assembly lines while passing cement, we danced to music, cheered, and bonded with one another. After a long day of hard work, we were able to take another trip to the beach. Although it was slightly cooler today, we were still able to swim in the water and play games in the sand. In the evening, we had a delicious pizza dinner, along with some salad and fruit. To wrap up our day, we reflected on what this service work meant to us, played cards, chess, and some very “competitive” volleyball. 17 against against 17. It was a full court with all 4 leaders acting as commentators. We are pumped for another day of work with the community tomorrow!
By Amelia and Arman

After a few of us went on a morning swim at the local beach, we had a hearty breakfast. Once finished we left for Maria and Angel’s house to work on their backyard. We built a concrete wall in hot sun to make sure the land around it didn’t collapse. Because of the heat, we took many breaks. For lunch Maria made some awesome chicken wings and rice with beans. After we ate, we moved quickly on to digging out the backyard floor to level it so they could put concrete over it. The dirt/clay was very hard so it took a lot of strength and team effort (and pickaxes) to level the floor. This took about an hour and a half of hard work. When we were finished for the day Angel, Maria, and William all gave speeches. During his speech, Angel started to tear up and it really touched our hearts because it showed how much our efforts meant to him. We all loved that we could see our impacts not only on a community but on a certain family.
By the awesome squad of the HOT TAMALES!!!!
Sierra, Ben, Lucas, Meera, and Ali

We woke up in beautiful Puerto Rico today and three people went running. We ate breakfast at 7:30 which included waffles and we took a one and a half hour bus ride to the Tropic Ventures rain forest. There we met Thrity and Tia we got split up into three work groups. Group one had to clear a path to build a staircase that led to a waterway. Group two made trenches for the road’s drainage and also cleared the dead plants off the side of the road. Group 3 cut down bamboo trees that were interfering with the power lines. We ran into a few obstacles such as a huge downpour and the breaking of the water pipe but in the end we got a lot of work done. We then ate a delicious lunch prepared by Thrity and other Tropic Ventures workers then we traveled to the swimming hole five minutes away. The swimming hole had fish that eat the dead skin off your feet which was almost like a massage. We drove back to the Big Yellow House and ate a dinner that consisted of chicken, potatoes, and salad. We finished off the night with a hilarious talent show featuring Joe winning by eating 17 packets of fruit snacks, Ben making fart noises with his knees, Derek on the harmonica, Max juggling oranges and many more acts that are too amazing to put words to. Every single person in the group participated. We ended with an ice cream party and eventually played volleyball like we do every night.
By Michael, Elena, Ted, Turner, Blake

Lindsey ignited the day with the Lion King instrumental and the events that followed were nothing short of magical. We strutted to the bus to greet our driver and start our journey to build Angel a floor. After the pre-work dance party came to an end we got to work. An assembly line of studs passed the buckets of cement to attempt to complete the task of finishing this floor. In the midst of what may have looked like a dance party, I took a glance at the floor from a short distance and noticed that we were nearing the half way point. Maria’s shouts of encouragement egged us on and propelled us toward our goal. Finally, we had reached a lunch break and devoured Maria’s lunch, which was nothing short of perfection. Once stomachs were full, we proceeded to complete the job, certain we were almost there.

Maria burst onto the porch and shouted, “you did it” and her euphoric expression said it all. William and Angel were the next to speak, and brought a few of us to tears. The words they used put into perspective how much this really meant to them and how happy they were to see the completed product. We finally hopped back onto the bus and got ready for dinner which was barbecue. William, Maria, Angel and Sari shared our final meal in the Big Yellow House and they even handed out bracelets thanking us for our hard work. All in all, it was an excellent way to end our four days of service.
By Joseph, Anna. Mathew, Brenna, Bennet

As we woke up this morning, we sadly realized it was our final day of this incredibly inspiring trip. We started it off by going on a small hike through El Yunque Rainforest and went for a swim in the freshwater river. After that we stopped for lunch near the beach, shopped for souvenirs, and swam in the ocean. We made our way back to Casa Coral and reflected upon our journey in Puerto Rico. At the end of the day, we went for a kayak trip at the Bioluminescent Bay where the water glowed like the stars in the sky. Finally, we came back to Casa Coral to say our final goodbyes. We’re not ready to leave. We’re going to miss the sense of community and family that has been established here. We’ve come so far in just a week and it’s hard to even fathom not being here or with these inspiring people. We want to pass on the idea that the people you surround yourself with is far more important than any material goods you can own. We also want to encourage more people to join Global Works in changing lives, not only for the people of Puerto Rico, but for people all around the world. This trip has changed our view on what a community really is. We’re going to miss Angel, Maria, and William and all the awesome people we’ve met more than anything. We’re going to miss living in such a beautiful place, surrounded by jungles, nature, and water. We promise to continue to help others and share Maria, Angel, and William’s stories. They’ve taught us what strength is and how to see the good even in the midst of a hurricane. Shoutout to all the people who made this trip possible and fun, we wouldn’t have traded it for the world.
By Shailen, Alana, Sofia, Hannah 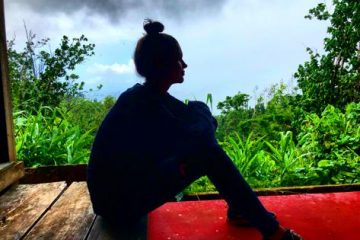