Today after a smooth arrival we started the morning with traditional churros con chocolate and some get to know you activities by the Cathedral!  After exploring the market and choosing some fruits for our evening picnic we had our first Spanish menú del día where some of us tried the cold tomato soup called salmorejo.
After a short siesta we went back to the historic center for a lovely cathedral tour and views from the rooftop.  We also toured the streets of Málaga. From touring the beautiful streets of Málaga we relaxed by the port and beach, where we enjoyed a picnic on the beach with the fresh fruit from a local Málaga market we had previously purchased.  We pushed through our jetlag and enjoyed a wonderful night of sleep after!

Today we woke up and had a wonderful breakfast. It was a mixture of Spanish food with jamón ibérico and American food with lots of cereal. There was also a ton of bread, which I ate a lot of! After breakfast, we walked a few blocks to meet our tour guide, Javi. He took us on a tour of the city, which included a beautiful Moorish castle. Javi spoke to us entirely in Spanish, and even though we didn’t understand 100% of it, we were able to then write down some new vocabulary words and history that we learned. We enjoyed the amazing from the top of the castle and then headed to the bus for our next cultural activity.

After the castle tour, we went and learned how to make paella. Some of us started by cutting green peppers, or pimientos verdes. Then, we learned how to echar the rice into the huge pan of red and orange pinta. After learning how to make deliciouso paella, we then patiently waited for it to cook. The wait was worth it and then we had a group meeting to talk about our goals and expectations for the trip. Once we all discussed this, we headed down to the beach and had an amazing time soakin’ up the sun. Some of us played soccer, tanned, or went swimming in the water. After the beach, we all took showers and headed into town! We had some shopping time and then went to an amazing tapas restaurant called Casa Lola. We all tried new things like patatas bravas (fries with spicy ketchup), gambas planchas (grilled shrimp), and montaditos (little sandwiches). Afterwards, we waked along the port and saw the beautiful lights reflecting on the water and the lighthouse shining from afar. Finally, we got gelato and bonded more as we took our walk back to the hotel through laughs, pictures, and eating gelato.

Today we ate our last breakfast (for now) at the Hotel Ibis in Málaga before packing our bags and heading to the white pueblo, or Pueblo Blanco, called Frigiliana.  There, we met Javi, who gave us a history tour of the twon, and we went on a scavenger hunt which involved many different activities such as asking question to the locals and finding certain landmarks.  After this, we drove the bus to the beautiful town of Nerja.  In Nerja we walked around and looked at the ocean and beach views, which were almost panoramic.  We then drove closer to the beach to eat lunch, which included a variety of foods from fried seafood to pasta.  After the hearty lunch, we walked to the beach and split into partners to begin our kayaking experience.  We learned our kayaking tips from our instructor, Lucas.  We kayaked for two hours along the coast, learning the history of the cliffs and taking a break to swim in the clear water.  After kayaking, some of us stopped for gelato before getting on the bus for the hour drive to our arrival at the Fundación.  We got settled in our guest house before meeting some of the residents and other volunteers, and eating our first meal.  We’re excited for our service experience at the fundación!

July 26, 2018
In the morning, we began our service work with FES. We performed a variety of tasks to assist the community, such as break baking, mosaic making, unpacking donations, and gardening. After we completed our work for the day, we had a delicious paella lunch and enjoyed each others’ company. Then we talked with community members about their interests and dreams. We shared our own passions and hopes for the future with them as well. Later on, Ignacio, the founder of this organization, gave us a tour of FES. He shared many touching stories regarding the reasons why people come to FES and how the community welcomes them. Lastly, we ate a dinner that consisted of chicken, fries, pizza, veggies, bread, and most importantly, ice cream! We are all looking forward to more service jobs and getting to know the community even better.

For breakfast, there was fruit, yogurt, bread, jam, and coffee. I, personally, tried the lactose-free yogurt, which was quite clumpy. After breakfast, we entered the service portion of the day lathered in layers of 70 SPF sunscreen and dresses in hats. The groups split as always. Some making bread (me), working on a mosaic, gardening, and organizing the donations for the foundation. The bread was of course made by us professionals. For lunch, we had spaghetti. ¡Muy bien! Also, we held hands and gave thanks to a volunteer who was leaving.

After, the group embarked on a long walk to our flamenco dancing class. There were many stairs as we climbed up a hill to witness a beautiful and breathtaking view. We danced like STARS. Then we had dinner…cod fish and olives, or as they say, aceitunas, for dessert, there was Italian ice…or so one volunteer THOUGHT when she ate it. Then we watched a flamenco show. The singers and dancers were incredibly passionate. The guitarist was mesmerizing. He was so talented.

We then walked back to the pretty view. We stopped for ten minutes there. Many people were there tonight because there was a lunar eclipse that comes every 17 years! Sadly, we had to hop on the bus to return to the foundation, and we did not see the eclipse until we got back and had a dance party. Goodnight everyone, we all miss you so much, but we are living it up in Spain! Much love to all. See you soon. Hasta luego!

Today we had a sleep in!!!! Instead of waking up at 8, we woke up at 8:30. After having our delicious breakfast at 9, which consisted of bread, jam, and yogurt, we were assigned to our service activities. There were four groups that we broke off into. These were bread-making, working in the garden, working on our mosaic, and helping out in the warehouse. I was assigned to helping out in the garden along with 2 others. We started working by planting lettuce and chard. Then we watered all the plants there were. This was a tedious process because each bed required 4 watering cans. After our snack break and a little bit more working came lunch. For lunch we had refreshing gazpacho and fish. Then, we had a siesta. When the pool at the Fundación opened at 4, we all jumped in with the little kids. At 5, we dried off and hopped on the bus to a nearby mosque. There we had a fascinating mosaic making workshop. We even made our own mini mosaic to take home with us! After the workshop we headed back to the Fundación for dinner. For dinner we had penne pasta and chicken (which was sooooo good). Lastly, our group got together after an exciting day to play mafia (a thrilling murder mystery game).

Today was a special day because we got to see one of the 7 wonders of the world: La Alhambra. La Alhambra is in the city of Granada. The group split up and some toured the beautiful castle on a nice cool morning (80 degrees Fahrenheit), while others went to look at a magnificent garden with a ton of spouting fountains and beautiful trees. La Alhambra had amazing mosaico art that we even recognized because of our class yesterday. We practiced a common phrase, “¡Qué… más…!” to comment on our impressions of the Alhambra today. ¡Qué cerámica más geométrica!  ¡Qué mosaico más complejo!  ¡Qué diseños más bonitos! ¡Qué fortaleza más grande! ¡Qué escaleras más difíciles! ¡Qué palacio más romántico !    ¡Qué día más tranquilo!  ¡Qué frase más útil!

Then, we went shopping in Granada. We were able to get some authentic Moroccan souvenirs and even some special treats for ourselves. We met up for a Moroccan lunch and drank some good tea. We then played games with each other, ate dinner, had reflection time, and hung out con comunidad.

Today after a day in Granada, we got back to work! We ate a great breakfast and received our roles. One team headed to the garden to water plants and cut the grass. One team went and finished up our beautiful mosaic in a courtyard in the FES. Another group painted benches and the last painted designs to be sold in the FES shop. It was super fun! (And messy)

After we finished our jobs, we ate lunch as a group, then went for some much-needed pool time! The FES shop opened at 5:00 pm and a bunch of people bought cute FES items!!

We all started the day off quite emotional for it was time to leave FES. Shortly after breakfast, we filled the bus and left for Sevilla, taking a break in the middle of the ride for Ronda. There, we had lunch and saw some beautiful views over the cliffs and river before returning to the bus. Once we arrived in Sevilla, having just woken up from our much needed, two-hour-long siestas, we shuffled into our hotel rooms. Soon, we stocked up on some snacks and went out to dinner. We then walked to the Plaza de España. Despite our exhaustion, we found no difficulty in admiring the meticulous designs and elegant architecture. Now many are sleeping and we are preparing for our final few days here. So sad and shocked that it is coming to an end so soon. See you all in a few days! P.S. Your kids are awesome haha! 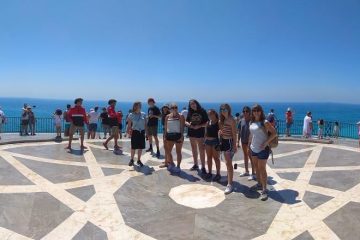