After we got off the plane. We took a bus to the hotel and we arrived at the hotel around 10:20 pm. Once we got settled in our room, we went back out for snacks and an introduction to Costa Rica Where we were introduced to our two guides, Jorge and Chalo. After, we settled down for night time.

We woke up around 6:45am and ate a delicious breakfast of scrambled eggs, toast, beans, rice, pineapple, watermelon, and coffee & juice. Shortly after our meal we departed from our hotel to go to the bus. For the first portion of the bus ride, we listened to music and played cards. We stopped at a gas station where we had our first contact with the Costa Rican currency, Colones. We arrived at Finca Cespedes, where we were spliced in three groups, one group at a time would go inside the workshop to make Palmito Cheese. We had a delicious lunch, and later they took us on a small farm tour, we got to see a lot of different fruits for the fist time, and learned about Costa Rican agriculture. Then we went to Heliconias, our new hotel, we all got settled in our rooms, we had pool time before having a dance class. To finish it all off, for dinner we had chicken & rice, french fries, and salad. Pura vida!

We woke up at Heliconias, had early breakfast, then we had an introduction to Costa Rican words and lenguaje. At 9:00 am we load the buses and head to Pueblo Nuevo where we were introduced to Mauricio and he gave us instructions for our service work. We had delicious lunch cooked by the local women. Afterwards we went to ASIS animal refuge, were we had a tour and saw different animals they were taking care of, we had the chance to feed them, and it was lot of fun. Later we headed back to the hotel and we had some pool time. We went to dinner and had a logistical meeting where our trip leaders told us about our activities for tomorrow.

This morning, we woke up early and had a traditional Costa Rican breakfast. Then, we went on a hike in the woods. We saw a tree covered in ants. After, we walked back to the lodges and boarded our three buses to return to the community of Pueblo Nuevo. We painted a kitchen, mixed cement and dug a ditch to make a piping system, later we played soccer with some community members and made tortillas, they were delicious! We said our thanks and good bye’s to the community members and headed back to the lodge for a nice, relaxing swim, the water was pretty cold but we had a good time anyway, afterwards we went to dinner and had delicious chicken and rice, also we had these amazing fries that many of us enjoyed. This lovely dinner was followed by a conversation about te next day’s exciting activities and reflection on our work with the community. We all feel incredibly glad and grateful to be spending time with each other in such a beautifully diverse country with such great trip leaders.

Today we had a fun day we took a break from the community work and did something special. The day started off with a later start at 8:00 and our own choice of breakfast from the night before, then we headed out for the first activity which was zip lining!! Though 3 people and Dominic decided on an alternative activity. The majority of he class went, the sights were absolutely stunning as you glided across at around 35 mph you could see the deep green of the forest, the gigantic Arenal Volcano, and the open water glistening in the light, after one of the most amazing experiences, we headed to go souvenir shopping. There were things every where detailing each part of Costa Rica, the people, the wild life, lifestyle and beauty. Everybody got something for themselves or a loved one, we moved on to a hike in what one can only describe being there, with a gorgeous waterfall and trees surrounding it felt a wonder of this world. As we swam and jumped from rock to rock we as a group were attracted to the waterfall going and looking in awe at its beauty. As we left our eyes strayed to the trees and gazed upon all the life that surrounded us and realized the beauty in this world. Though today we may not have gotten to celebrate Valentine’s Day in a conventional sense, we celebrated together as a class in a way nobody will forget. 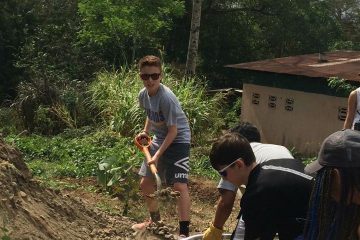 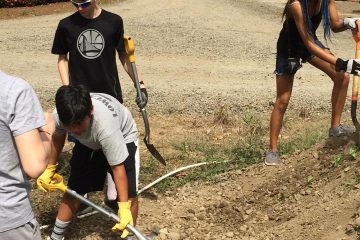 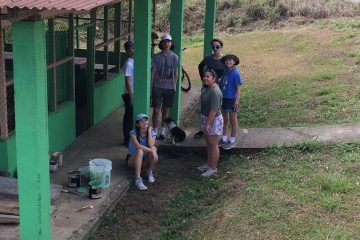 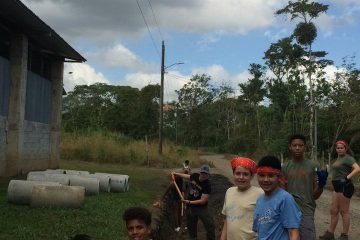 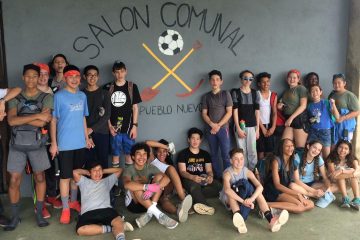 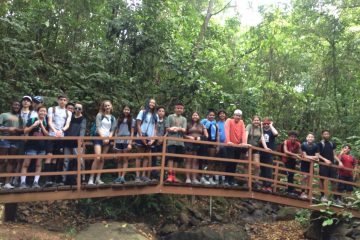 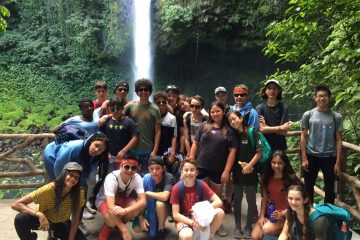 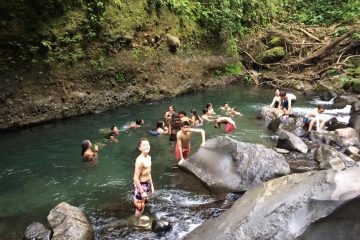 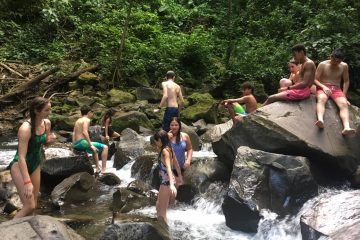